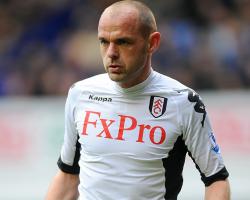 Fulham caretaker boss Kit Symons can rotate his squad for the visit of London rivals Charlton on Friday night.

Symons made five changes for the midweek 3-3 draw at Rotherham with only one of them enforced - defender Tim Hoogland missing out through illness.

Hoogland will return if he passes a fitness check while strikers Bryan Ruiz and Hugo Rodallega, defender Sean Kavanagh and former Charlton midfielder Scott Parker will also be in contention after they were rested.

Fernando Amorebieta is still out with a knee injury and Adam Taggart remains sidelined as he recovers from a back problem.Charlton midfielder Yoni Buyens is suspended after picking up his fifth yellow card of the season against Bolton on Tuesday night.

Winger Johann Berg Gudmundsson (ankle) and six-goal top scorer Igor Vetokele (Achilles) missed the 2-1 victory at The Valley and remain doubts, although boss Bob Peeters has not ruled them out completely.

Defender Joe Gomez (ankle) and striker Simon Church (shoulder) will miss out but Chris Solly is poised to return at right-back having rested his troublesome knee in midweek with the trip to Craven Cottage in mind.