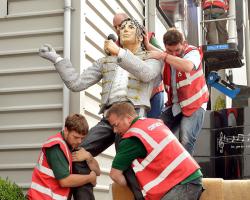 Fulham V Crystal Palace - view commentary, squad, and statistics of the game live.Magath ready to reshape FulhamFelix Magath will put faith in Fulham's exciting crop of youngsters to fire the Cottagers back into the Barclays Premier League next season.Relegation from the top flight was confirmed last weekend with a 4-1 defeat at Stoke and Magath's team could finish bottom of the table if they fail to beat Crystal Palace on Sunday.There was some room for optimism on Monday night however, as Fulham's Under-18s put on an impressive performance in the FA Youth Cup final, losing 7-6 on aggregate to Chelsea.Magath, who watched both legs of the final, wants the the club's young talent to form the backbone of his new side in the Championship next season."The key is to come back to the Premier League - now we can make a change to make our younger players the basis of the future," Magath said."We will give our youth academy more opportunities than we have in the last few years and there will be some players who will join us in the first team."We are starting again and that is the good thing from the situation - we are now able to change the things we want to."Of the eleven Fulham players to start against Stoke, seven were aged 30 or older and only two were younger than 28.One of those was 22-year-old Dan Burn who has been given a chance to impress in defence this year while the likes of Patrick Roberts and Moussa Dembele are also considered to have bright futures."There is excitement," Magath said

"Because that is what I stand for and what I like - building a team, working with young players."That is what I have discussed with our owner - trying to make Fulham a club that can play a big role in the Premier League rather than just in the relegation fight."It's a nice challenge."Some of the club's veterans such as Scott Parker, Steve Sidwell and John Arne Riise may be moved aside to make way for fresh blood coming through.Magath, however, insisted it is too soon to make decisions on who will be leaving the club and believes it will be important to maintain a degree of experience in the new set-up."I take care of the younger players but if you want to build a team you can't only have young players, you need some experience too even if it is based on young players," Magath said."For me, [players' futures] was not on the agenda until last weekend because it was more important to think about the end of the season."Now we have to speak to the players who want to stay and have contracts."We have to find out which ones will be here and which ones will leave us and we will start that in the next few days."Kostas Mitroglou could return to Fulham's starting line-up as they look to salvage some pride in their final game.Meanwhile, Tony Pulis has offered no guarantees that he will still be in charge at Crystal Palace next season.The Eagles face Fulham as they bring the curtain down on a remarkable campaign, in which Pulis has hauled them from the bottom three in November to mid-table.But the Selhurst Park boss will hold talks with chairman Steve Parish next week and wants assurances about the direction of the club before deciding whether the trip to Craven Cottage will be his last game at the helm."Will I be here next season? I hope so," he said

"I've got two years left on my contract but there are managers with longer than that who get the sack, so you can never say I'm going to be here 100 per cent."I think there are certain things that should be done at football clubs to enable them to be successful."The club has a window of opportunity, the best opportunity the club has had for a long, long time to actually go forth and improve on and off the pitch."I had a smashing meeting with Steve on Thursday

We'll get the game out of the way on Sunday and Steve will have spoken to the other directors about my thoughts about moving the club on, and we will all be having dinner again next week when no doubt those discussions will go on further."You can't stop speculation and people saying he's going to do this or that

My relationship with Steve has grown stronger and stronger the longer I have been at the club."Pulis will have a fully-fit squad at Fulham after striker Cameron Jerome recovered from the illness which kept him out of the 3-3 draw with Liverpool on Monday