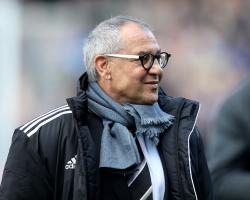 Magath hopes to take chanceFelix Magath hopes Fulham can capitalise on the absence of banned Newcastle boss Alan Pardew in Saturday's Premier League clash at Craven Cottage.The Cottagers are four points adrift of safety with nine matches to play, beginning at home to the Magpies, who are without Pardew for the first of seven matches due to his ban for head-butting Hull midfielder David Meyler."Every team has his manager beside normally, so it's not usual

(But) always you have to take the chance," Magath said."Everybody makes mistakes

That's it."Magath has called on his players to wake up to their predicament at the bottom of the table and seize their chance against Newcastle."The most important thing is to win one game to give the players and the team more confidence," said Magath, who has one point from his three matches in charge."We didn't take the chance three times

If we can realise that I think we have a good chance (of survival)."Magath targeted six wins from 12 games on his appointment, but is still chasing his first.He believes results at Craven Cottage will be key, with the Magpies, Everton, Norwich, Hull and Crystal Palace and thinks six wins is still achievable.He added: "Now we have five home games left

I think it is possible to win the home games and take a win from the away games too."Winger Ashkan Dejagah faces a fitness test to determine if he can play after picking up an injury in last week's loss at Cardiff.Midfielder Georgios Karagounis is out with a muscle strain suffered in south Wales, joining Scott Parker (knee) in the treatment room.Parker could be back next week, but Damien Duff (knee) is out for the rest of the season.Pardew has been dealt a major blow

Pardew will set his team out in advance but leading scorer Loic Remy is likely to miss the next three games with a calf problem, and he will be joined on the sidelines by full-back Mathieu Debuchy, who has a groin problem and will sit out at least the same period.Central defender Fabricio Coloccini returns after a family bereavement, but keeper Rob Elliot and full-back Davide Santon (both knee) remain doubts and midfielder Hatem Ben Arfa will not be included because of a family illness.Newcastle skipper Coloccini insists Pardew has the full support of his players as he prepares for his enforced exile.The 52-year-old boss will begin this three-match stadium ban and will subsequently spend four matches watching from the stands as part of his punishment for headbutting Meyler.Pardew has also been fined a total of B#160,000 and left in little doubt that his behaviour at the KC Stadium, where his side won 4-1, was unacceptable.However, while the contrite Newcastle manager readies himself to deal with the consequences of his actions, Coloccini has confirmed that he has the backing of the dressing room.The 32-year-old Argentina international said: "Of course we are behind him

The players and the club support him."He knows what he did

All of us can do something wrong."After these seven games, he is going to have the chance to show to everyone it was a mistake, and no more than that."Pardew will give his team-talk at the hotel before handing over the reins to assistant John Carver as the players board the bus for Craven Cottage, and will be helpless from that point on.But he has faith in Carver, who worked under Sir Bobby Robson at St James' Park and led the club to a 3-0 Barclays Premier League victory over Blackburn as caretaker manager in September 2004.And the players share that trust.Coloccini said: "He's an experienced man

He was here for the best years when Sir Bobby Robson was here."It's nothing new for him