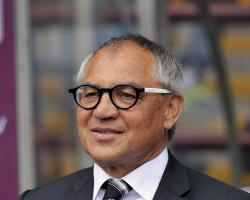 Magath's ranks bolstered by trioFulham manager Felix Magath could welcome back three players for the crucial Barclays Premier League clash with fellow strugglers Norwich on Saturday.Defender Dan Burn is fit after a muscle problem with midfielders Scott Parker and Giorgos Karagounis also returning to the squad.Club-record signing Kostas Mitroglou remains sidelined with a knee injury but loanee Darren Bent could feature having missed the win over parent club Aston Villa last weekend.If Magath can mastermind back-to-back league wins for Fulham for only the second time this season they will close to within two points of Norwich.And defender Jonny Heitinga convinced the west Londoners can maintain their place in the Premier League."You have to believe we can still do it, I believe we can," he said."The only thing that matters right now is the club's survival - we just need to find the way

This is the first time I've been involved in a relegation battle, but you have to deal with the same pressures as when you are challenging for trophies."Of course, the trophy for us will be staying up in the Premier League

It's a real challenge but it's up to us to play as well as we can between now and the end of the season."Neil Adams insists his first match as Norwich manager will not on its own determine whether the Canaries retain their top-flight status.Adams replaced the sacked Chris Hughton on Sunday after the loss to West Brom which leaves Norwich five points clear of the relegation zone.Matches with Liverpool, Manchester United, Chelsea and Arsenal follow for the Canaries and many predict the losers of the Fulham-Norwich clash will be consigned to the drop.But Adams said: "I keep hearing the must-win, the one-game season

It's a five-game season

We're capable of beating anybody."Adams, who last season led Norwich to victory in the FA Youth Cup, could invoke a seige mentality."If people want to write us off, great," he said."We'll be confident we'll win games

If people want to give us no chance, fine."We're used to that

We're down at the bottom end of the table with six, seven, eight other clubs who have been written off on a weekly basis."(But) at Carrow Road against the big teams we've won games."For these next four weeks, five games, we've got to leave no stone unturned and come what may, whatever happens, one thing we would've done was given it everything."We've got to stay in this division this year

That's the one and only goal."Defender Michael Turner and Leroy Fer could be in contention to return after recovering from hamstring injuries and Wes Hoolahan is expected to be included in Adams' first starting XI.Defender Sebastien Bassong should be fit following a knock, but Elliott Bennett (knee) is again involved with the under-21s