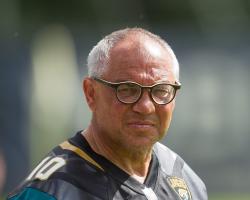 Fulham V Wolverhampton - view commentary, squad, and statistics of the game live.McCormack set for Fulham start Ross McCormack is poised to return to the Fulham starting or the visit of Wolves.The B#11million striker was dropped to the bench for Saturday's 1-0 defeat by Millwall after a disappointing debut, but impressed as a half-time substitute as well as building up his match fitness, which had been a concern for manager Felix Magath.Fellow forward Adam Taggart remains the only injury absentee with an ankle problem.Magath could make further changes with Shaun Hutchinson, Chris David and Cauley Woodrow pushing for starts.Wolves also have no fresh injury worries

Crewe were due compensation as ex-trainee Clayton was under 24 and had been offered a new deal.He will take an unchanged squad to Craven Cottage as Tommy Rowe (broken toe) will not feature