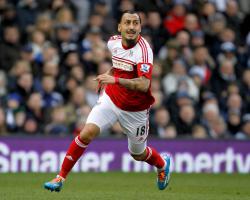 Mitroglou is finally available to join the squad for Saturday's Barclays Premier League clash at Stoke after almost two months out with a persistent knee problem.

The ?12milllion accusation on transfer deadline day has made just two appearances since his arrival in January.

With Fulham's Premier League survival hanging by a thread, Magath is wary of using the Greece striker at this stage of the season and will not be influenced by his price tag.

"Kostas is part of our team now and he can play again this season," Magath said.

"I feel pressure to pick the best 11

It is not just black and white when you consider a player, you must think about how to get the best from him.

"He's a player who is very dangerous in the box

At the beginning, as we played, we weren't coming into the box.

"It was not the right situation for him

Now we are creating some chances and coming into the box

In the box he is very good.

"Kostas wants to play and will help us

You never know if he has not played how he will realise his abilities in a game.

Magath accepts that only victories against Stoke at the Britannia Stadium on Saturday and against Crystal Palace at Craven Cottage eight days later will give Fulham a chance of staying in the top flight.

One point separates them from safety in what has developed into a fraught relegation battle, with every team from Hull, in 13th, downwards still in danger of the drop.

Magath, who insists he will be reading German crime fiction to help calm his nerves over the coming days, has never been relegated in his 19-year managerial career.

"I'm afraid for the club, not for my personal record

I have nothing to prove in my career," he said.

"I knew it was a difficult situation when I came here

I'm confident I can manage it.

We can make it better on Saturday."