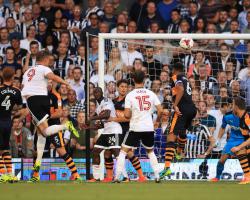 The 6ft 6in striker exposed poor marking from a corner as Rafael Benitez's side found the going tough in a high-tempo encounter.

Fulham had only included four players who featured in a struggling side last season in their starting eleven - Michael Madl, Ryan Tunnicliffe, Tom Cairney and Smith - the latter who led the line following the sale this week of Ross McCormack to Aston Villa.

In front of a raucous Craven Cottage the game was played at a lightning pace early on but with little in terms of goalmouth action.

Fulham looked the more lively and inventive but it was Newcastle, relegated from the Premier League last term, who came closest in the opening stages with Ayoze Perez's free kick from the edge of the area hitting the wall.

Ritchie then had claims for a penalty waved away after Ryan Tunnicliffe appeared to handle in the box.

However it was the hosts who finished the half strongly

The impressive Sone Aluko, the former Hull forward, was denied by Sels after a run and shot from the edge of the area.

And Fulham went on to take the lead in the 45th minute, Smith able to find space in the area too easily to head past Sels from Cairney's corner.

Newcastle started the second half well but it was David Button who made an impressive save with his legs to deny Ritchie following Vurnon Anita's run.

Perez then glanced wide from Ritchie's cross while the former Bournemouth winger powerfully drove straight at Buton from distance as the visitors pressed.

And when substitute Rolando Aarons then missed kick in front of goal it did not appear to be Newcastle's day as they failed to break down a side with the worst defensive record outside the second tier relegation zone last season.

Fulham could have sealed victory as left back Scott Malone drove wide after a clever one-two with Aluko while Floyd Ayite nearly caught out Sels with a left-footed curler.

But at the other end Ritchie had penalty appeals waved away after his shot struck Tomas Kalas on the arm and in the dying stages Button had to push away an Aarons effort that nearly crept in.