Al Fayed- Absurd to blame me 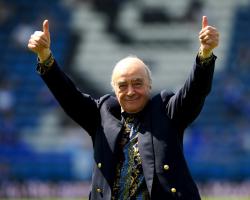 The Cottagers were relegated from the Barclays Premier League in May, after 13 seasons, and a poor start to life in the Sky Bet Championship saw fans of the club calling for the manager to be sacked

Magath told the London Evening Standard Al Fayed "had not spent money", despite injecting around Â£200million into the club in 16 years to take them to the Premier League

You cannot go on doing that for a long time"

However, Al Fayed has described suggestions he is to blame as "absurd" and was keen to point the finger back at Magath and "absentee landlord" Shahid Khan, who he sold the club to last year

Writing in his column for the London Evening Standard on Friday, Al Fayed said: "What an odd man Felix Magath is

"No, what's strange is that after losing Fulham's first four games of the Championship season, he has got time to criticise me - someone he has never met - instead of devoting every waking second to putting right his own glaring mistakes.

"There is nothing dishonourable about failure, if you face up to it

What is wrong, and frankly un-English, is to blame someone else instead of taking responsibility for your own actions.

If a week is a long time in politics, 13 months is a lifetime in football

Mr Magath was brought in to stave off relegation from the Premier League but instead presided over a meek surrender.

"It broke my heart

After 16 years at the helm at Craven Cottage, to see my work destroyed in a season was a bitter experience

To be blamed for that failure, is absurd.

"Fortunately, there are 25,000 people who know the truth

Al Fayed also insisted he spent money in the best interests of the club, who saw their best years under his ownership as they reached the final of the Europa League in 2010.

Fulham achieved their highest ever top-flight finish, seventh," he wrote

"We carried English prestige into the inaugural season of the Europa League, taking Atletico Madrid into extra-time in the final and within five minutes of a penalty shoot-out

"Mr Magath says I bought only average players? So who were the men playing that night in Germany? I'll tell you: titans of the game and every one a hero.

"In football, you cannot be an absentee landlord, as I fear Shahid Khan is most of the time

I went on the pitch before games

I met the fans

I talked to the players

Yes, they are paid a lot of money but they are still young men who need inspiration

People work for people, not anonymous boards of directors

I gave the players gold chocolate bars from Harrods

If they needed to try harder, I handed out blue peppermints and said they were Viagra

"Those players never let me down.

"The personal touch is important

Every manager I chose tried to take Fulham forward

Two of them became England managers."

He added: "When I was young, there was a cartoon character, Felix the Cat

Whatever happened to him - whether he was run over on the road to Dover or blown up with dynamite - he just kept on walking.

"If Fulham's results do not improve, starting with Cardiff tomorrow, perhaps this particular Felix should follow that cat down the road to Dover and then just keep on walking."