Berbatov expected to stay at Fulham 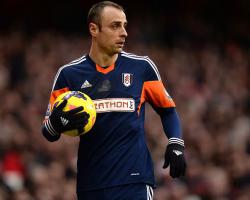 Although a number of big-money deals have already gone through involving English clubs, plenty more activity is likely as Friday's deadline approaches.

Meulensteen has been less busy than some of his counterparts, drafting in Clint Dempsey on a short-term loan from Seattle Sounders and sanctioning the departure of Bryan Ruiz until the end of the season.

He was cagey when asked about his plans, but hinted that business may be easier to do at the 11th hour.

"People always say the transfer market is a month but it's not a month, it's a week and then 24 hours.

"That's what it comes down to."

Meulensteen has been linked with reinforcements up front, particularly if the enigmatic Berbatov departs.

The Bulgarian's agent suggested earlier this month he was unhappy at the club and keen to move on, but Meulensteen sees no change in his current position.

"We're not (looking for a striker) at the moment," he said.

"We've got Darren Bent, Hugo Rodallega and Berbatov. I expect Berbatov to stay because there has been no interest so far."

Fulham must shore up their defence to climb the Premier League table, according to Meulensteen.

"We need to steady the ship defensively, we need to tighten it up and the fact that Brede (Hangeland) has come back has been a big boost for us, and Dan Burn has been doing tremendously well," the Dutchman added.

"We still need to get more clean sheets. That has not changed."