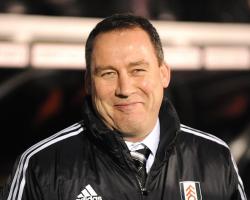 The Cottagers went down 2-0 at leaders Arsenal on Saturday when Santi Cazorla fired in two quick second-half goals to break what had been a resolute defensive display.

Meulensteen is determined to find the positives from an overall improved performance following on from a 6-0 capitulation at Hull and last weekend's 4-1 home reverse by Sunderland.

"We are starting to look more solid, and that is our way forward," said the Dutchman.

"It gives confidence to the whole team, a feeling that we are more solid and that it is harder for opponents to break us down.

"We just need to make sure that one goal conceded does not create a ripple effect, which then creates a wave of negativity, we switch off for one split-second and all the hard work is undone."

Meulensteen added: "We focus on improving performances - making sure that we are defensively more solid, because we strongly believe that if we get more clean sheets, that will eventually keep us up.

"We have enough quality to win other games and to create chances to score."

Fulham are just a point above the drop zone, but also only five points off 10th place in a congested bottom half.

"I am quite happy that there are lots of teams involved, it is going to be one of the most exciting leagues in years," Meulensteen said.

"A good result can get you three or four places up the table, and then a bad one can put you right back in it."

Captain Brede Hangeland, now recovered from a back problem which needed surgery, feels Fulham can produce what is needed to pull clear of trouble.

"At times we have struggled with the balance between defence and attack, and as a consequence of that we have played some good games, but got thoroughly beaten even though we played well which is hard to take," he said.

"We need to find that solidity which we did have at times against Arsenal and then spice that up with some good play going forwards."