Fear of failure spurs on Magath 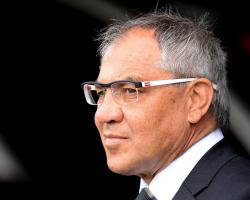 While Magath is convinced victories over Stoke at the Britannia Stadium on Saturday and at home against Crystal Palace the following weekend will result in survival, he is still racked by nerves.

The veteran German manager has never experienced relegation during his 19-year coaching career and knows Fulham are close to ending that proud record.

"For me, it (keeping Fulham in the Premier League) would be my most successful achievement," the Whites boss said.

"I have never been relegated and I'm a bit afraid of the situation, I don't know how it feels to be relegated

"I am always nervous, without nerves you cannot bring 100 per cent.

"The mental side is always the most important thing - the players know how to kick, mentality is what we are fighting for."

Fulham are one point adrift of safety with two matches remaining and Magath accepts only two victories will clinch a 14th successive Premier League season.

"I still believe two wins will be enough," he said

"There is no doubt, we need three points to have the chance to not be relegated

That is the situation.

"We know Stoke are a very good team at home, but we are confident that we have developed in the last few weeks and showed against Hull last weekend that we are able to play good games.

"Away from home we won at Aston Villa and we are confident we can manage it.

"The atmosphere is very good and the players want to show people we are still alive."

Both Stoke and Palace have climbed out of the relegation battle, leaving them with nothing to play for this season, but Magath denies mid-table opponents signpost an easier route to safety.

"I don't think so because if you are safe you have a lot of confidence, so it could be that their payers do better than before," he said.