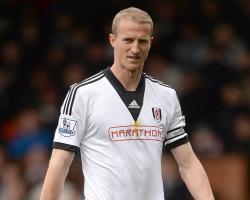 The 32-year-old joined from FC Copenhagen in January 2008 and made 272 appearances during his time with the Cottagers, which included the club's run to the 2010 UEFA Europa League final under Roy Hodgson.

Hangeland is the latest confirmed departure as manager Felix Magath prepares for life in the Sky Bet Championship.

Midfielders Damien Duff and Steve Sidwell have been released, along with Giorgos Karagounis, Mahamadou Diarra and John Arne Riise