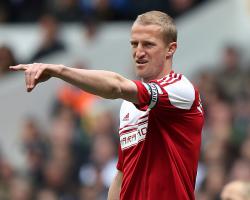 Fulham enjoyed the highs of top-10 finishes and a European final in the seasons that followed, but now find themselves again facing a fight for survival.

Only three matches remain following Saturday's 3-1 defeat at Tottenham and, while they sit 19th heading into next weekend's match with Hull, captain Hangeland is confident they can beat the drop.

"I think all three games remaining now we look at those and think, 'yeah, we should probably get something from all of them if we play well'," the 32-year-old Norwegian said

"That is the task we have to set ourselves.

"It (the great escape) can definitely happen again

Before Saturday, we had two wins on the spin and we know it is possible.

Hopefully that will see us through."

Saturday's defeat to Spurs leaves Fulham on 30 points with home matches against Hull and Crystal Palace either side of a trip to Stoke to play.

Hangeland has refused to set a points target - "I don't really work like that, you try and win the next match" - but believes the performance at White Hart Lane bodes well.

"I think we had our chances," he said

"On another day, it could have been a different story.

"We can't hide from the fact we conceded three goals and lost the game 3-1, so we need to put this to bed as soon as possible and focus on a massive game next Saturday.

"The games are running out

We felt like we could get something here but that wasn't to be so onto the next one."

Like Fulham, Tottenham are also hoping to end the season with a flourish given they face matches against Stoke, West Ham and Aston Villa.

However, even winning all three is unlikely to be enough to secure a top-four finish and may be too little too late for Tim Sherwood, who is widely-expected to be replaced in the summer.

His position as head coach comes under increasing scrutiny each week, but forward Harry Kane insists it is not distracting for the players.

"I think all the players have got on with it," the England Under-21 international said.

"You can see against Fulham and recent performances we've been playing great, we've been scoring goals.

"All the players are focused on the games ahead.

"We're just taking each game as it comes

We've got three more games and we want to win all three, then wherever we end up, we end up.

"They are three winnable games and we'll take this into the next one."

It appears few Tottenham fans would be sad to see Sherwood leave this summer, although his focus on youth will leave a lasting legacy.

Nabil Bentaleb has become a first-team regular under the former midfielder as has 20-year-old Kane, whose header against Fulham was his third goal in as many games.

"I obviously have three in three now and hopefully I'll get more between now and the end of the season.

You've got to take your chance every game and I have been able to do that so far to keep my place in the team.

"There is competition at every level and you have to perform at a high standard."