Hangeland- Well pick ourselves up 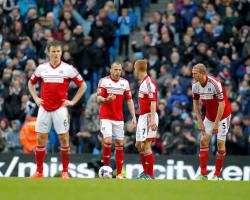 Title-chasing City brushed aside the Barclays Premier League's bottom side at the Etihad Stadium on Saturday as they took full advantage of Fernando Amorebieta's sending-off.

The one consolation for the Cottagers was that none of their relegation rivals collected any points either, and Hangeland has not lost appetite for the battle.

The Norwegian defender said: "Obviously you are low when you get beat 5-0

It was a difficult game for us.

"But what can you do? You have to pick yourselves up

There is no point dwelling on any game of football, and definitely not a defeat like this.

"We are going back to London to work on training and prepare for Sunday."

Asked if the squad believed they could stay up, the 32-year-old said: "Very much so

We have quite a few games we know we can win

It is still doable and there is a belief we can do it.

"Time is running out a little bit and we need to pick up results.

"But if we are honest, we didn't expect to win at Man City

We will have to get them elsewhere."

City were not at their best but were still far too strong for Fulham.

Amorebieta was perhaps harshly ruled to have fouled Alvaro Negredo for City's first penalty but there was no debate when he felled David Silva for a second, prompting his dismissal, early in the second half.

Fernandinho and Martin Demichelis completed the rout in the closing minutes.

Hangeland said: "I thought we did well first half, but with the two penalties and the sending off, the game in reality was over.

"It was about damage control at that point and we didn't really do that very well."

Fulham face another difficult afternoon as they host Everton next Sunday.

John Heitinga, who swapped the Toffees' European push for Craven Cottage in January, is not fazed by the different and difficult situation he now faces.

The Holland defender said: "I knew when I came to Fulham that it was going to be hard and a long season.

"Hopefully my experience will keep Fulham in the league.

"We will still need to play better

We need to fight to survive.

"There are still seven games to play and most of the games are at home, so we need to keep (getting) the points."