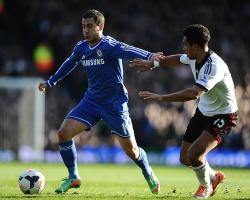 The German midfielder plundered a second-half treble at Craven Cottage to end the hosts' brave resistance and send Jose Mourinho's side four points clear of the chasing pack following a 3-1 victory.

Belgium playmaker Hazard, 23, had a hand in two of the goals with his intelligent runs and perfectly weighted passes, and nearly crafted another when a superb reverse-foot chip just eluded Fernando Torres at the far post.

Schurrle, signed from Bayer Leverkusen in the summer, feels there is plenty more to come from Hazard after the Belgian marked his 100th Chelsea appearance with a man-of-the-match display.

He is a great player and everybody knows that," Schurrle said.

"When we are on the pitch, he can take on two or three people, we make a run and he sees us."

Schurrle, 23, made full use of a rare Premier League start, but maintains the win at Fulham was down to a team effort.

"It's important for me of course, I want to play and I want to score goals for this great team and the great fans of this club.

"When I am on the pitch I try my best and today it went well."

Mourinho revealed he had given his side a dose of the silent treatment at half-time following a lacklustre opening 45 minutes, which may well have been a consequence of the gruelling midweek Champions League trip to Istanbul.

However, it was a ploy which had the desired impact.

Schurrle said: "It was strange, but everybody knew coming into the dressing room that in the first half, we had played bad

Everybody knew we had to change.

"The manager was in there for 10 or 15 seconds, said something, but I don't want to say it here (again), then he left.

"The pressure was on us to change [in the second half], so we did."

Chelsea could move further ahead at the top next weekend, given Manchester City and Arsenal are both involved in the FA Cup quarter-finals.

"We have a good young team, everybody grows in this season to be successful," said Schurrle.

"We are top and we want to stay there

We have to believe we can win this."

Fulham had started well in some welcome spring sunshine on the banks of the Thames, and should have taken an early lead when Clint Dempsey glanced a close-range header wide, which would have given the match a completely different dynamic.

In the end, though, all Felix Magath's men had to show for a largely spirited display was a late bundled goal from Johnny Heitinga as consolation.

Fulham remain bottom, some five points off safety and with a far inferior goal difference.

The bleak outlook, however, could change quickly if Magath's men can win at fellow strugglers Cardiff next weekend.

Midfielder Pajtim Kasami said: "We have to do is stick together and think about the next game

We have to take the positives and look forwards.

"We have the quality to do it and we have to fight in the next 10 games and a massive one against Cardiff next week."