Hughton defiant as Canaries bow out 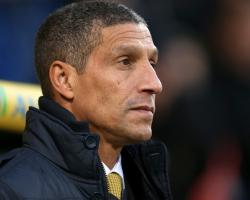 Darren Bent, Ashkan Dejagah and Steve Sidwell fired Fulham into the fourth round and a trip to Sheffield United.

Hughton said he fully understands the pressure of his situation, but does not fear the sack.

"My only concerns are doing the job to the best of my ability and getting results for the team," said Hughton.

Hughton defended his side's scenario, claiming one or two results can spin everything around. They face Hull at Carrow Road on Saturday.

"Do I worry about not getting results? Yes, because that's the business we're in," he said.

"But we're also three points away from 10th place and there are teams that have deemed to have had good seasons that are perhaps one or two points ahead of us in the division.

"So sometimes we have to look at what the reality is, but at the moment we're hurting because we haven't done well enough to win today.

"It's a tough period, but I wouldn't say it's my toughest period.

"You have to remember we finished 11th last season, but with three games to go we were one of seven or eight teams that could have gone down.

"We've had tough periods, but you have to come out of these stronger and the only thing on my mind is firstly the disappointment of going out, and we've got a massive game on Saturday we've got to try to win."

Lamenting lax defending, Hughton refused to lay into his players, instead shouldering the burden of defeat himself.

"I'll always take responsibility myself: I'm the manager of this team," he said.

"We win together and we lose together, and I'll always take full responsibility."

Hughton is confident his side can arrest their slump.

"I understand all of the pressure that comes with this," he said.

"We as a club wanted to go through in this competition, and we had a support that travelled a long way and what they saw wasn't good enough.

"It is a period where we have to make sure we stick together, show strength as a team, because a team going out there must believe they can win.

"I'm sure by the time Saturday comes around they will do."

Fulham boss Rene Meulensteen praised fit-again captain Brede Hangeland's steadying hand on his side as they hit back from Saturday's 4-1 league humbling at home to Sunderland.

"It's a big, big boost for us to have him back," said Meulensteen.

"He is so calm out there and he did extremely well getting through the 90 minutes."