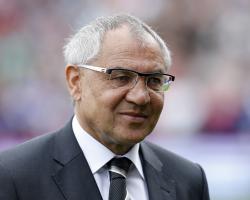 Reports state that Khan is ready to sack Magath, whose six-match reign dating back to February 14 has yielded only four points, but the German is unconcerned over his future.

He knows the situation, he knows how things work," he said.

"I have no doubt about my contract

I don't worry about it.

"It's normal if things in clubs don't go well

There is politics, people who call journalists and tell them 'I know that is going on', but I don't care.

"Sure I'll be here next season

I'm here to build a team

That was clear from the beginning.

I will be here next season and I will do that here."

A knee injury has restricted Mitroglou to two appearances since his deadline-day arrival in January and while it seems increasingly unlikely he will be involved again this season, Magath is adamant he will be back.

"Kostas will recover before the end of the season

We check him day by day

I hope he'll join us next week," Magath said.

Crucially, their three remaining home games are against Norwich, Hull and Crystal Palace.

"Four wins are enough to stay up and we are able to do that," he said.

"We need to win now

Winning a game is the most important thing

We have to win and that will help us a lot.

"The players haven't given up

You are not confident if you're losing games, but at the training sessions they are concentrating and eager to do their job."