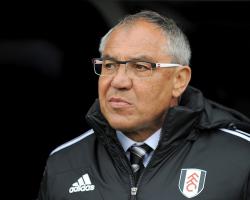 Magath was viewed as a disciplinarian unafraid to push his players to the limit during his long career as a manager in Germany's Bundesliga, but he has also demonstrated a softer touch since arriving at Fulham two months ago.

As a reward for their 1-0 victory over Norwich on Sunday, the players were given two days off

Magath insists his players now understand he is a reasonable man.

"The players read a lot of stories before I came, and they are afraid: 'What happens now?'" the Fulham manager said.

"If the players work with us - not only me, but my athletic coach and my assistant coach - they realise that we are not monsters

Don't worry about it, it's not so bad!

"Maybe at the beginning they were afraid about what they had read."

Magath explained that one of the most pressing matters when he joined relegation-threatened Fulham on February 14 was to ease the sense of fear that had gripped Craven Cottage.

"You have to change the atmosphere to take out the fear," he said.

"That was the most work, that the whole club supports the players and gives them confidence.

"We invited some fans here to join training and afterwards we sat together for lunch with the fans, they talked together.

"We had a sports day for Sport Relief, with the players and the staff on the same teams."

Fulham are two points adrift of safety with four matches remaining and Magath has urged his squad to ensure survival for the club, not for him.

"I don't want the players to go for me, because I don't pay them

The club is paying them, not me," he said.

"So I tell them every time: you have to go for your club through a wall or spring from a bridge.