Magath had to alter squad mentality 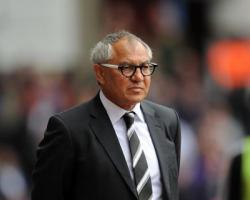 A win at Aston Villa last weekend means the Whites remain in the hunt and they welcome fellow strugglers Norwich to west London on Saturday knowing a win would take them within two points of escaping the relegation zone.

With three of their five remaining league games coming against teams in the bottom half of the table, Fulham's run-in certainly looks more favourable than Norwich's, whose new boss Neil Adams faces the daunting prospect of a final four games against Liverpool, Manchester United, Chelsea and Arsenal.

But Magath insists he had to change the mentality of the squad he inherited two months ago and wants to build on 2-1 win at Villa Park.

"At the time all the people were telling me, 'we have 12 games left and we have a good schedule'," he said.

"They saw the possibility but they didn't realise that first you have to make points to have a chance [of staying up] at the end.

"Now everybody knows we have to win at the weekend

It is very difficult for Norwich

It doesn't matter, the result on Saturday, because for the rest of the season they have tough games."

But Magath feels he has shown his softer side, insisting the whole club need to work together to give Fulham the best chance of surviving.

But it's not just a question of the manager

The whole club has to be in the right mood

It's not possible for one man, it doesn't matter who it is.

If you have to many people inside your club, you can do what you want but it will never work

You have no chance to give the players the right atmosphere."