Magath open to offers in England 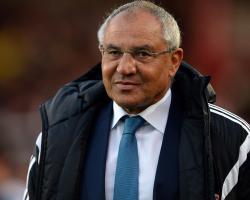 Magath's reputation took a knock during a troubled seven-month stint in the Cottagers' hotseat, but he insists he still has something to give - and that his future lies in England

"I'm going to stay in England and I will see what comes," said the 61-year-old, who left Craven Cottage a week ago with the team at the foot of the Sky Bet Championship

"I still believe my methods can still help at some clubs."

He added in Germany's Sport Bild magazine: "I certainly don't doubt myself."

Magath previously led Bayern Munich to back-to-back Bundesliga and DFB-Pokal doubles, before arguably topping both by guiding an unfancied Wolfsburg to their first-ever Bundesliga title in 2009

His most recent success was a second-place finish with Schalke in 2010, but a return to Wolfsburg did not work out and he oversaw Fulham's relegation from the Barclays Premier League last season.