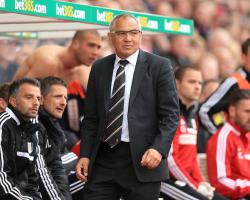 Kieran Richardson's late consolation came too late to save the 60-year-old Magath from experiencing the first relegation of his long, nine-club managerial career.

Magath said: "As you can imagine that is one of the worst days I have ever had.

"I was convinced before the game that we had a very good chance but today was what you would call in Germany a blackout.

"There was no fighting spirit there

I think they felt too much pressure - we cannot run, we cannot pass, we cannot play and we have never been in the game.

"Everybody is down on the bottom and there are some tears but I have to take the responsibility and I apologise not only for today but for not managing the situation because I was convinced we would stay in the league."

Fulham's dismal display was encapsulated by Magath's decision to haul off Lewis Holtby in the 34th minute, with the Cottagers boss reiterating a belief he first aired after the loss to Chelsea in March that the midfielder lacks the stomach for battle.

Magath added: "I think the player (Holtby) is very skilful but he doesn't get any of the ball or fight - there was nothing for him today."

However, Magath went on to insist he was ready to commit himself to trying to haul the club straight back to the top flight next season and would seek immediate talks with owner Shahid Khan.

Asked if he wanted to stay, Magath answered: "Yes, sure.

"We have to talk about the situation

I will talk about the situation with the owner and we will start to come back."

Mark Hughes expressed some sympathy for his former club after consigning them to the drop.

Hughes spent less than 11 months in charge of the Cottagers before resigning in June 2011 admitting he needed a new challenge.

Hughes said: "I've seen a number of people who worked very hard for me when I was at Fulham and obviously they're very upset at the moment.

"You don't like to see people you've worked with go through that but it's an unforgiving league and you have to get the job done which we have and they haven't.

Hughes expressed satisfaction with the way his side took an immediate stranglehold on the game and made sure to finish a healthy Britannia Stadium campaign on a high.

Hughes added: "It was a difficult game for us because it was deemed a game we didn't have anything to play for but we knew what we wanted to achieve today and that was three points.

It might have been more difficult if they had got in front but they had to throw people forward to get on level terms and that played into our hands.

If we'd got something out of the (Tottenham) game last week we'd have been looking at a perfect end to the season."