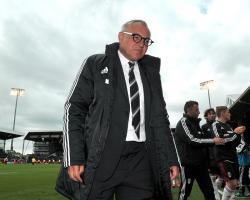 The Whites' 13-season presence in the top flight ended with a 2-2 draw with Crystal Palace at Craven Cottage after their destiny had been determined by last weekend's 4-1 defeat at Stoke.

Owner Shahid Khan made it clear in the matchday programme who he blamed for the club's relegation by branding the contribution of some members of the squad as "simply unacceptable".

And Magath supported his chairman by revealing one player told him the team did not have the stomach for the job.

"We never fought as a team that fights against relegation

If I look at the TV and saw Sunderland or Norwich playing, they had much more fight than us," Magath said.

"I asked my team what was going on and one player told me 'we cannot fight'.

"No, I've never been at a club before where a player has told me they can't fight

I was surprised to hear that and I don't know why he said it.

It's not a problem if it's only one player."

Chris David scored a stunning injury-time equaliser to at least end Fulham's season with a highlight after driving the ball home from 30 yards.

"It was relief to score that goal because we'd played well for 90 minutes," Magath said.

"The young players worked hard and I was sorry that they were a goal behind because they didn't deserve that.

This was the start of the new season for me."

Palace took the lead twice through striker Dwight Gayle and manager Tony Pulis paid tribute to improvement made by the ?6million summer signing from Peterborough.

"When I first came to the club Dwight was the marquee signing," Pulis said.

"We'd spent a lot of money on him and it looked like he had the weight of the world on his shoulders in lots of respects.

"He wasn't really integrated into the group and he looked a bit on the fringes, so we spent a lot of time opening him up as a person and a player.

He didn't need the pressure, we took that away from him and he's improved immensely.

"Now he looks like what he is - a very, very good goalscorer

I expect a good return from him next season."