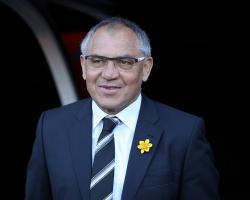 "This victory will help us for the next games," Magath said.

"It was the most important thing for the players to win

They believe we are going the right way.

"Now we are convinced we can manage it

We are able to avoid relegation and now I think the whole team, the whole club, all the supporters, they are hopeful that we will do that."

Fulham next play at Manchester City and could be without Dejagah, who was unable to complete the match due to an adductor injury.

Goalkeeper David Stockdale was selected ahead of Maarten Stekelenburg due to the Englishman's more forceful personality and made a number of fine saves in the contest.

Newcastle were without manager Alan Pardew - serving the first of his three-match stadium ban for his head-butt on Hull midfielder David Meyler - and goalkeeper Tim Krul missed his boss.

"It's not the same without the manager on the side because he gives you the extra confidence and maybe a little bit of help, but he did everything in his power to help us," Krul said on skysports.com.

"It didn't affect the team, we just had to take our chances and we didn't."

Krul also bemoaned referee Howard Webb's decision not to award a late penalty after the Dutchman had gone up for a stoppage-time corner and believed Johnny Heitinga had handled the ball in the box.

Krul said: "His arms were up in the air and in my opinion it was a penalty."

"If you think back to two seasons ago when he could have had his own programme on goal of the season, some of his goals he scored were out of this world.

"At the moment Papiss' confidence is down

Only because he hasn't been scoring goals.

If he's not getting in there, then we do have an issue.

"It would be dead easy for him to sulk and to be unhappy, because he hasn't been in the team, but he has actually worked extremely hard.

"Good goalscorers, when they get a little bit of confidence and get that first one, sometimes they hit a run.

Maybe he needs a scruffy goal."