Magath vows to carry on 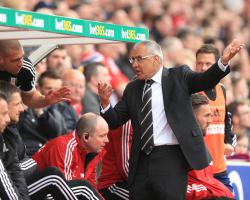 Magath's future will inevitably come under close scrutiny after a 4-1 defeat to Stoke which confirmed the 60-year-old had failed in his mission to avoid the drop and in the process experienced the first relegation of his own storied nine-club career.

Magath made no excuses for the feeble manner of his side's demise, with goals from Peter Odemwingie, Marko Arnautovic, Oussama Assaidi and Jonathan Walters serving Stoke up the simplest of wins, with a late Kieran Richardson effort offering scant consolation

But defiant Magath insisted: "I don't think to do anything else except stay at Fulham and build up a new team - that was the idea when I came here

"It is clear we have to change something, I want to have success with Fulham in the next years

I will talk about the situation with the owner and we will start to come back."

Magath was damning in his verdict of his side's performance, accusing his players of lacking fighting spirit and being overwhelmed with nerves on such a big occasion

"You saw no fighting spirit and therefore I think they felt too much pressure," added Magath

"I apologise for not managing the situation because I was convinced we would stay in the league but we are relegated."

The visitors' troubles were encapsulated by Lewis Holtby, who sailed an early free-kick into the arms of Asmir Begovic then suffered the ignominy of being hauled off just past the half-hour mark with Magath later accusing his player of offering "nothing" to help his side's survival fight

Stoke finally got the goal their performance deserved in the 39th minute when Ireland's shot struck Dan Burn, ricocheted against the underside of the bar and bounced down for Odemwingie to slot home a simple opener

With next to nothing to excite the massed ranks of visiting fans, Stoke increased their lead on 54 minutes when Arnautovic smashed home an Odemwingie cross to make it 2-0, then Arnautovic turned provider to square for Assaidi to grab his side's third 17 minutes from time

Richardson pulled one back on 80 minutes but Stoke wrapped up a fine performance when Walters finished off another swift counter-attacking move.

With a successful end to his own side's season assured, Hughes will now turn his attention to securing the future of on-loan winger Assaidi, with talks having already begun with his parent club Liverpool.

Hughes said: "It's important that we accept that he's not our player, he's Liverpool's player, but he's done really well for us and we're very pleased with what he's produced.

You need the right players around you to maximise your ability and I think he's found that at Stoke City, so we're hopeful.

"But it's out of our hands to a certain extent because it depends what Liverpool value him at."