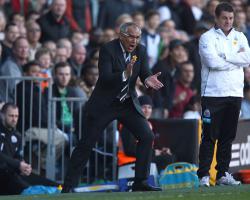 Ashkan Dejagah struck eight minutes after coming on as a second-half substitute to give Magath his first win as Fulham boss at the fourth attempt in Newcastle's first match since Alan Pardew's headbutt of Hull midfielder David Meyler earned a three-match stadium ban.

It was the Cottagers' first Premier League win since collecting three points on January 14 against Norwich, following two points in the intervening eight games, and the remaining eight matches will determine their fate.

Fulham are now within a point of second-bottom Cardiff, but West Brom remain four points ahead by winning at Swansea.

"I do not care much about the other results," Magath said

"It was not only the result today

We were the better team.

"It will give us the confidence that we can avoid relegation and stay in the league.

After this game and this victory I'm more than convinced."

Fulham thought their goal had come earlier as twice in the opening 10 minutes of the second half they had the ball in Newcastle's net, only for Pajtim Kasami and Cauley Woodrow's efforts to be ruled out for offside.

Woodrow put the ball in after Johnny Heitinga's shot had bounced down off the crossbar and, replays showed, by the smallest of fractions, on to the line.

Magath, an advocate of goal-line technology, had no complaints.

He added: "I'm glad that we have it here in the Premier League because that makes it more fair."

Magath made five changes following the loss at Cardiff, including fielding David Stockdale in goal in place of Maarten Stekelenburg, a selection which the Englishman justified with a string of outstanding saves.

"It was a hard decision for Maarten, but he has taken it very well," Magath added.

"Maarten is a quiet keeper

He's not loud and David is more exciting, he's louder

That was my idea.

"He was very good

We can thank him for this very good performance."

Stockdale denied Papiss Cisse and Fulham broke, the ball finding its way to Dejagah, who fired a shot under Tim Krul.

The Iran winger was unable to complete the game due to an adductor hip injury which meant he was limited to a place on the bench.

Magath also revealed Darren Bent was not considered due to a private matter.

Pardew was helpless watching a live feed from his west London hotel as Newcastle suffered a fifth-successive loss.

Magpies assistant manager John Carver twice spoke to Pardew during the game, at half-time and towards the end of the 90 minutes.

Carver said: "It was pretty brief

Two conversations and that was it.

"Other than him not being here for the 3.5 hours, he's been right at the front of it."

At full-time Carver highlighted a possible penalty when Krul went up for a stoppage-time corner and felt the ball hit Heitinga's arm, only for referee Howard Webb to blow for full-time.

Carver had to keep his composure and tame an angry Krul.

"I certainly counted to 10," Carver added.

"I had a nice, sensible conversation with Howard and he explained his reasons to me and I accepted that.

"He (Webb) said that in the position he was in he couldn't actually see it hit his arm.

"(But) sometimes when you're not quite sure you think 'let's end the game now'.

"Tim was a bit animated

He wanted to go to see him

I said no, get yourself out, don't go there