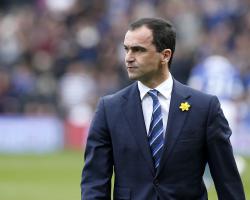 A triumphant sequence spanning five successive Barclays Premier League games has transformed them into genuine contenders for Europe, but Martinez insisted the competition is fierce.

"Being in this position gives us an understanding of what a good season we've had," Martinez said.

"With the points we have, we have a realistic chance to fight for that aim (Champions League).

"I'm not saying we're going to get that because we admire Arsenal because they get in the Champions League consistently.

"They have developed a real understanding (of) what to do in these games, so that makes Sunday a phenomenal challenge.

"It will probably go down to the last game of the season.

"Look at the quality and experience of Manchester United and Tottenham, they will fight until the end

Strikes from substitutes Kevin Mirallas and Steven Naismith and an own goal by David Stockdale consolidated fifth place for Everton, who are four points adrift of Arsenal with one game in hand.

But it was Fulham who dominated the first half and they even fired an equaliser through Ashkan Dejagh, only for the arrival of substitutes Aiden McGeady, Mirallas and Naismith to seize the initiative for Everton.

"Fulham started better than us

They were very energetic and stopped us doing what we wanted to on the ball," Martinez said.

"The second half was a bit different

The fresh legs of Naismith, Mirallas and McGeady gave us a different spark

"We were the team who finished stronger than the home side, but even then it was a really open game.

"We are a team that is prepared to fight and that will give everything to get a positive result."

Martinez confirmed that Ross Barkley was substituted at half-time with a calf injury, but is expected to be fit to face Arsenal.

Fulham remain rooted to the foot of the table, five points adrift of safety and with just six games to secure a 14th successive season in the top flight.

Boss Felix Magath took enough positives from the performance against Everton to justify his conviction they will escape relegation.

"It was a very important game and it's very disappointing that we lost," Magath said.

"But if you see how we played, it gives you another view

It was our best game

We created a lot of chances, but we didn't score enough goals.

"I'm not planning for the Championship now, we will try again next weekend.

"I know that we can still make it because Everton are one of the best teams at the moment but we didn't play like a relegated team against them."