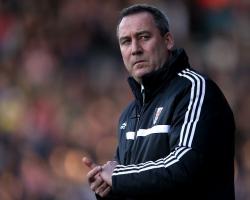 The Fulham head coach pledged to do whatever it takes to bring new recruits to Craven Cottage by the end of the month.

Fulham are likely to add a defender and a striker to their squad, with Brondby's Denmark forward Simon Makienok among their targets.

Captain Brede Hangeland should be fit to return in Tuesday's FA Cup third-round replay against Norwich after back surgery.

"There are constant ongoing discussions, but as we all know it's a difficult time as well," said the former Manchester United coach.

"Any manager that has the opportunity to do something that he knows will improve what he has, then he will take it.

"Anything that will give us a better chance to stay up, of course you'll do it.

"Brede is very close, very close, he's trained really well and hopefully we can introduce him on Tuesday.

"When Brede comes back you get a very, very experienced defender, and hopefully that will give us some more options."

Holland goalkeeper Maarten Stekelenburg had been expected to make a return from injury in Saturday's Sunderland clash.

But now Meulensteen thinks his first-choice stopper will not be ready for the Craven Cottage cup showdown with Chris Hughton's Norwich.

"He will have to be assessed again: he's still a doubt for Tuesday," said Meulensteen.

"He's progressing nicely, but maybe just not enough to make it back for Tuesday.

"Let me start by saying first and foremost that David has done an excellent job.

"But Maarten is an international established goalkeeper and he has done well for us, so it will be a big boost for us to come back."

Boateng has made just three Fulham appearances since his May 2013 move to Craven Cottage.

"We're looking in terms of Derek as a player that has a chance to go to the World Cup," said Meulensteen. "So we've allowed him to speak to Watford."