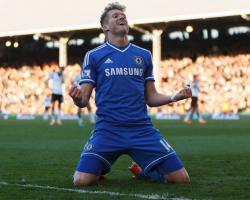 The Blues, who have now opened up a four-point gap at the top of the Barclays Premier League, looked tired in a first-half before a masterclass in finishing from Schurrle settled the game - with only a later Johnny Heitinga goal acting as consolation for Fulham in the 3-1 defeat.

After the game Chelsea boss Mourinho, well-known as a man who is happy to speak his mind, admitted it was his silence at half-time which spoke volumes to his players.

"The first half was really bad for us

I don't know if they controlled us, or if we didn't start

It was a really bad first half.

"It was silent (at half-time)

After that they know I'll start talking.

I decided not to speak because, if I started to speak about the first half, I'd need more than the 10 minutes of half-time."

Mourinho, who admitted he could not recall another time in his managerial career when he has deployed such a tactic, praised the response from his side as they furthered their lead at the head of the table.

"I decided not to speak, they showed they were very intelligent," he said.

"Without words, they understand - especially if you know the person - what goes in their minds, so they knew the first half was really poor and they transformed it into a fantastic second half.

"I haven't had many first halves like this one - it was very bad."

With Arsenal losing at Stoke, the Blues moved further clear and now have a four-point advantage over the rest of the field.

Despite their improved position, Mourinho is still wary of Manchester City, who are six points behind but have two games in hand.

"We have four points more than Arsenal, the same number of matches," Mourinho added.

"If City win their two matches in hand, they're top

I'm there for now, but if City win the two matches they're top

We have four points from Arsenal and Liverpool, but not yet on City."

Fulham head coach Felix Magath, who lost captain Brede Hangeland to a head injury in the first half, berated his side's defending after the interval and highlighted Chelsea's first goal as a particular low point.

"I was satisfied with the first half," he said.

"We had two or three good situations but I don't know what happened at half-time and it seems the players forgot to defend.

"It was for us a very big problem that our captain was injured and wasn't there in the second half.

"I don't know how difficult the injury to Brede Hangeland is and I hope he will come back and join us next week but we have to work on defending.

"I have seldom seen a goal like the first today

He can run 90 metres and score with no contact."

Magath conceded a lack of confidence among his squad meant it was always going to be a difficult task to hit back after Schurrle's opening strike.

"If you take over a team who have not won for weeks they are losing confidence," he said.

"We started very well and we fight very well against Chelsea but after they get one goal you don't have the morale to come back."

The defeat leaves Fulham bottom of the table and four points from safety with 10 games left for Magath to guide them to safety.