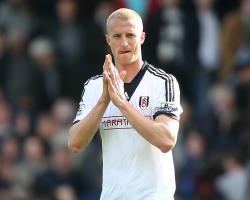 Two early second-half goals on Saturday looked set to be enough for the Whites to pick up a valuable three points at home to Hull, only for the FA Cup finalists to hit back with two of their own in the closing 15 minutes.

Ashkan Dejagah and Fernando Amorebieta both struck to put Fulham in charge before Nikica Jelavic pulled a goal back after capitalising on a Sascha Reither backpass, with Shane Long heading home an 87th-minute equaliser.

A share of the spoils saw Felix Magath's side remain in the league's bottom three with just two games left to secure another season of top-flight football.

A trip to Stoke next Saturday is followed by a home game against London rivals Crystal Palace on the final day of the campaign, with Hangeland targeting maximum points

"I think we need to win the last two," he said.

"That is clear for everyone to see

Is that impossible? No, it is far from impossible

Of course we can do it.

It is a massive game next week and we have to win that."

Long grabbed Hull's late leveller and believes the draw means the Tigers no longer need to look over their shoulders as the relegation fight hots up.

"I think it was a massive point for us," he said.

"It keeps them six points behind us with two games left, but with a worse goal difference, so we can look at Fulham as finishing behind us at least.

"It was a big point for us, it was a big thing not letting them get three points - 36 on the table with Fulham on 33 behind us would have been a bit more scary.

"I thought we were fully deserving of at least a point, but after they went 2-0 you get to thinking it isn't going to be our day

We can go to Aston Villa, not switching off, but quietly confident that we are fairly safe."

Hull boss Steve Bruce spent big in January to bring in both Long and Jelavic, with their partnership again proving fruitful at Craven Cottage.

But Long hopes the understanding can develop over time as both strikers look to repay the faith shown in them by Bruce.

"The gaffer went out on a limb and spent a bit of money getting me and Jelavic in and hopefully I can reward him with goals on the pitch," added the Republic of Ireland international.

Jelavic is a handful and puts himself up front which surprised me a bit before I came in.

"I think we compliment each other well, but we are still learning off each other and hopefully we can add to our goal tally before the end of the season and then have a full pre-season together."