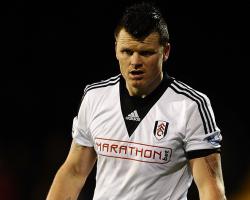 The Fulham defender has challenged his side to sharpen up in front of goal for Tuesday night's FA Cup third-round replay against Norwich at Craven Cottage.

Rene Meulensteen's side were swatted aside 4-1 by Sunderland on Saturday, in a dispiriting league defeat in west London that drags Fulham straight back into the relegation picture.

Now former Liverpool full-back Riise believes Fulham must be far more cut-throat when on the ball against Chris Hughton's Norwich, to lead into Saturday's imposing league trip to Arsenal.

"We had 60 per cent possession (against Sunderland), we dominated possession but we didn't take our chances," Riise told Fulham's official website.

"We should be more experienced to keep control of the game, especially when we got back to 2-1.

"We've been conceding too many goals, especially from set-pieces.

"We have to do better in games like this, and now we've definitely got to get the win against Norwich."

Fulham boss Meulensteen hopes loan signing Clint Dempsey will quickly hit the form that so endeared him to Craven Cottage regulars in his first stint at the club.

United States forward Dempsey, on loan from Seattle Sounders, scored 50 league goals for Fulham between 2007 and 2012.

And after two quick appearances at the start of his second Fulham stint, Meulensteen expects him to hit full form.

"It won't take long for him to be right back up there," said Fulham's head coach.

"He's just got to keep working, but that's his character and that's exactly what we know he will do."