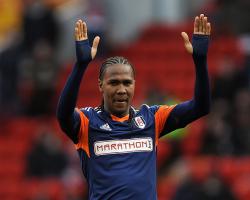 Cottagers boss Rene Meulensteen made his priorities clear with 11 changes for the game but he would still have hoped for better than a laboured 1-1 draw against a side who are not yet safe in Sky Bet League One.

On a waterlogged Bramall Lane pitch that made life hard on all concerned, the Blades went ahead through Chris Porter's 31st-minute finish and looked likely to hold on even after Michael Doyle's needless red card eight minutes into the second half.

But Rodallega's fourth of the season forced a replay, the Colombian drilling home from the edge of the area in the 75th minute.

Both sides were denied penalties, Rodallega and Ryan Flynn both apparently fouled in the area only for referee Andre Marriner to wave play on each time.

Fulham might have saved themselves a replay in the closing stages as Philippe Senderos headed against the crossbar and Darren Bent flashed wide from a yard but the Blades were well worth a second chance.

After a late pitch inspection saw the game given the green light, Fulham's day began badly.

John Arne-Riise's involvement lasted just 10 minutes, the full-back injured as he slid to dispossess Flynn at the byline.

With rain continuing to fall there was little chance of flowing football, Patjim Kasami and Rodallega coming closest only for Neill Collins to emerge at the last moment and shepherd the ball to safety.

Former Everton man Jose Baxter bent his free-kick towards the bottom corner from 20 yards but was a yard wide of working David Stockdale.

Another heavy downpour threatened to make life even more difficult for the players but just after the half-hour, the Blades gave the game the goal it needed.

Centre-half Harry Maguire was the unlikely creator, advancing up the field before powering a low ball into the box where Porter was able to get the crucial touch. Senderos might have reacted better in defence, but Porter's instant finish was decisive.

The celebrations would have been short-lived had Marriner awarded Fulham a penalty a matter of seconds after the restart but he was unmoved by Rodallega's appeal.

The striker was one-on-one with George Long after connecting with Muamer Tankovic's through ball and appeared to be clipped on his way through.

As it was the lead held until the interval and within 90 seconds of the second half, United were without both men involved in their goal.

Porter was replaced at half-time by new signing Stefan Scougall and Maguire followed him in making an early exit after collapsing in pain for the second time in the match.

The disruption was to get much worse for United in the 53rd minute when Doyle lashed out at Chris David off the ball and was dismissed without hesitation. David's reaction was theatrical to say the least, but the lack of dissent from Doyle suggested he had erred.

Remarkably, the sending-off was almost followed by the hosts' second goal as Flynn broke at pace, shrugged off Hughes and drilled low at the near post. Fortunately for Fulham, Stockdale stood firm and saved with feet.

The addition of Bent from the bench at least gave Fulham a proven scorer on the field, while the mercurial Adel Taarabt joined the fray with 24 minutes remaining.

But the League Two side would not lie down and with 70 minutes gone, the direct running of Scougall and Flynn left Fulham all at sea and just as the latter closed in on goal he was tripped by Hughes.

Marriner again waved away appeals, seemingly incorrectly. It was a massive call and the visitors cashed in with 15 minutes left.

It took a single moment of quality from Rodallega, who shuffled into space 20 yards from goal and fired low into the bottom corner.

That gave his side the platform to press for the win and it almost came as United finally flagged. First Senderos rattled the woodwork and the centre-half was involved again in a move that saw Bent fluff his finish after Pajtim Kasami nodded across goal.

Anything less than a return trip to Craven Cottage would have been harsh indeed and some stout defending in added time secured it.