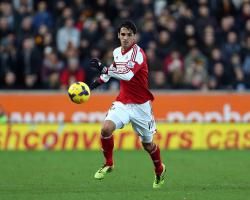 The Costa Rica international has fallen down the pecking order at Craven Cottage since Rene Meulensteen was placed in charge in December, featuring in just two matches under the Dutchman.

Ruiz moved to Fulham in 2011 after a successful spell with FC Twente and reportedly cost the Barclays Premier League side in excess of ?10million.

The 28-year-old began his career in Europe with Gent in 2006 and went on to average almost a goal every other game during his spell in Belgium, before replicating such form at Twente.

He will Costa Rica at the World Cup, where Jorge Luis Pinto's side will come up against England, but it remains to be seen if he will return to Fulham next season.

The move to PSV had been expected and the club issued a short statement on their website to confirm the deal had been completed.

"The club can confirm that Bryan Ruiz has joined Dutch outfit PSV Eindhoven on a loan deal until the end of the season," it read.

"Having made 14 appearances for the Whites in the current campaign, Ruiz will now link up with Phillip Cocu's side as they aim to improve on their current standing of seventh in the Eredivisie.

"Everyone at Fulham would like to wish the Costa Rica captain well during his temporary spell in the Netherlands."