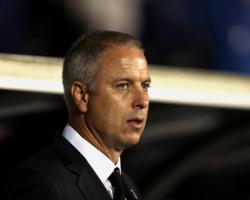 Shahid Khan, the chairman of London side, has convened a five-man panel to help him appoint a new manager of Fulham, relegated from the Premier League last season, after terminating the woeful spell of German boss Felix Magath a Craven Cottage.

But Symons is doing his best to make his own case, having guided Fulham, previously winless this season, to back-to-back victories.

"That performance and result certainly won't do me any harm," Symons said

"When I took over I tried to galvanise the club and get everyone pulling together, and to start winning games, and on both counts it's going pretty well so far.

"It's a great feeling hearing the fans sing my name

I've had stadiums booing me before, when I played, so it's nice to have one cheering me now."

But Fulham's success did little for Symonds's old friend Dougie Freedman, the Bolton manager, whose side have now won just once win in 10 matches.

"It's the other side of the game

We're euphoric and on a high, but unfortunately there's always someone on the other end of it," Symonds said.

Freedman added: "It's a difficult job and it's proving to be more difficult than I thought.

"But I feel very confident we can do it

Will I be given time? I think so.

"The performance was concerning

We've gifted them a goal once again

We've got to stop giving away silly goals.

"We need a result

I've told the players they are in a relegation battle, with a big 'R'."