Win or bust for Magath 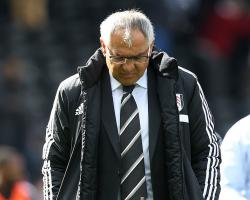 The hosts threw away a two-goal lead in the last 15 minutes at Craven Cottage as Hull's Nikica Jelavic and Shane Long cancelled out Ashkan Dejagah and Fernando Amorebieta's earlier efforts.

The draw means Fulham remain in the relegation zone with a trip to Stoke to come next before a crunch home game against Crystal Palace on the final day.

"We have to win the two last games," Magath said.

"We lost two points today and that was not what we wanted but as long as there is a chance we will keep trying and I am sure we can get two more wins.

"We played well in the second half today, things were good but now we have to accept this result

Everybody feels we have to win the next game."

An uneventful contest sprung into life after 55 minutes when Dejagah bent a left-footed shot into the top corner and just three minutes later, Amorebieta doubled the advantage with a header.

It looked like Fulham would go on to clinch a vital victory but Jelavic pulled a goal back with quarter of an hour remaining before Long nodded home at the back post in the 87th minute.

"It was very disappointing how the second half ended up because things went well, as we hoped they would," Magath said.

"It was 0-0 at half-time and that was not bad - we wanted to go forwards more and create more attacking situations and we scored twice.

"But unfortunately we conceded goals which were more or less own goals and we missed out on the victory.

"That is disappointing because if you're leading 2-0 at home you have to win."

Magath insists he is not concerned about the psychological effects of his team's late collapse and has called for his players to stand up and be counted when they play Stoke next weekend.

"They were quiet and disappointed [after the game] but I said it's too late now to win that game and we have to stand up and get ready for the next game," Magath said.

"A victory would obviously have given us confidence going into the next match but we have to take the situation as it is.

"We have to stand up now and show that we can play as well away as we have at home."

Hull have three league matches left and are almost safe with six points now separating the Tigers from the bottom three.

Steve Bruce insists survival is not guaranteed yet but says his team's fightback at Craven Cottage was typical of the character his players have shown all season.

"The reason we're 13th and in the FA Cup final is we don't give up, we have a crack at it and we keep on going and we rightly got the rewards today," Bruce said.

"If we hadn't have got the point today we might have still been in it - 37 points might be enough but we've got three games to go and to get ourselves into this position is all credit to the players.

"We've been in and around mid-table since last September and to get to a cup final and to be hopefully safe with three games to go is a remarkable achievement by the players."