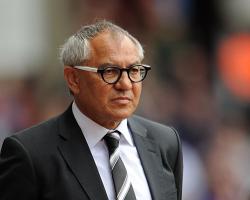 Magath celebrated his first away win since taking charge of the Cottagers as goals from Kieran Richardson and Hugo Rodallega earned them a 2-1 triumph at Villa Park.

Fulham remain five points adrift of safety with five games remaining after West Brom and Crystal Palace also won, but Magath believes the victory will give them impetus for their survival push.

He said: "It was very important we won here after losing our last home game

Therefore, it was a very difficult game and very spectacular

"We were one goal in front, there was an equaliser, and that was the situation last week that put us down

Today we came back and we fought.

"Even the great chance for Lewis Holtby didn't stop us

"We have to win our games now

It doesn't matter which team we play

We will fight every game

Today we have won and this win will give us confidence."

There was a feeling after Fulham's home defeat by Everton last weekend that they were virtually condemned to life in the Championship.

But they received vociferous support from their travelling fans at Villa Park and took the lead in the 61st minute when Richardson rifled in a shot from outside the area.

It was a very open game, and it took Villa only nine minutes to find an equaliser as Grant Holt headed in his first goal for the club.

Fulham looked certain to retake the lead when Lewis Holtby rounded Brad Guzan only to see Matthew Lowton pull off a miraculous clearance with virtually the whole of the ball over the line.

But the visitors were not to be denied and in the 86th minute half-time substitute Rodallega flicked Holtby's cross into the bottom corner.

Magath revealed he has given his players two days off as a reward, saying: "You can imagine now how the players in the locker room are happy, happy and they forced me to give them two days off, so I have

They deserved it today."

Fulham's happiness was Villa's despair, with Paul Lambert's side left looking nervously over their shoulders again after a third straight defeat

Lambert was left with little choice but to play Holt up front after the blow of Christian Benteke being ruled out for the season with a torn Achilles, while Gabriel Agbonlahor failed to recover from a stomach bug

Lambert said: "We lost Fabian this morning and Gabby hadn't recovered from the bug and throw (Karim) El Ahmadi into it - that's a big chunk of our team

"Looking at the table and fixtures, there are some real hard games for everyone

"I'd rather be in our position than a lot of teams

You have to look after yourself."