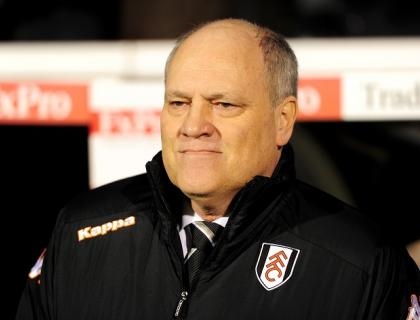 Berbatov magic wins it for Cottagers

A sumptuous volley from Dimitar Berbatov was enough to settle a forgettable encounter between Fulham and Stoke at Craven Cottage.

Berbatov struck his ninth goal of the season on the stroke of half-time after the hosts had dominated possession without truly testing Asmir Begovic.

The volley was head and shoulders above the general quality of the match with Stoke forward Jonathan Walters missing a second-half penalty as Fulham moved to within a point of the Potters in the Barclays Premier League table.

Stoke were the first side to test the opposition goalkeeper as Peter Crouch dropped deep before threading a ball into the run of Walters, who forced Mark Schwarzer into a smart low save.

The hosts then took control of the remainder of the first half with Berbatov firing over the crossbar from six yards after being picked out by the returning Sascha Riether.

Bryan Ruiz had the ball in the back of the net after 11 minutes but was cautioned by referee Lee Probert for clearly using his hand to convert Damien Duff's free-kick.

John Arne Riise forced a decent save out of Begovic as he powered in from the left before rifling in a low shot.

Stoke were lucky to not be reduced to 10 men midway through the first half as Steven Nzonzi, who had taken a knock on the nose in an earlier collision with Berbatov, was booked for shoving Ruiz in the face. Giorgos Karagounis struck the resulting free-kick well and Begovic was forced to tip over.

Fulham remained on top and forced a number of corners which had resulted in very little as Stoke struggled to get the ball out of their own half.

That goal finally came in first-half stoppage time as Ashkan Dejagah and Riether combined down the left with Riether's cross headed into the path of Berbatov by Robert Huth and the former Manchester United man smashed home a volley of the highest quality.

Crouch almost muscled his way in to level for Stoke as Fulham's Philippe Senderos attempted to shield the ball back to goalkeeper Schwarzer.

Crouch pounced but Schwarzer got to the ball and managed to keep his side ahead.

The visitors were then presented with a great opportunity to equalise 10 minutes into a more even second half.

Probert awarded a penalty as Dejagah blocked Potters' debutant Brek Shea's cross with his arm but Walters hit a tame spot-kick that was easily kept out by Schwarzer.

Berbatov almost doubled his tally with another fantastic effort.

The Bulgarian flicked the ball away from two defenders before firing in another volley with Begovic able to parry it away.

Shea, a first-half introduction for the injured Matthew Etherington, then came close with a half-volley as Stoke started to fight their way back into the match.

Fulham responded well to Stoke's attempts to fashion an equaliser and started to play some football of their own once again.

Karagounis worked a short corner routine with Dejagah before the former Panathinaikos midfielder arrowed a shot just over the crossbar.

Ruiz then wriggled his way into the box before his cross found its way to Sidwell, whose shot was deflected around the post for Fulham's ninth corner of the game.

Nothing came of the set-piece but Fulham survived to win just their second league game since New Year's Day.