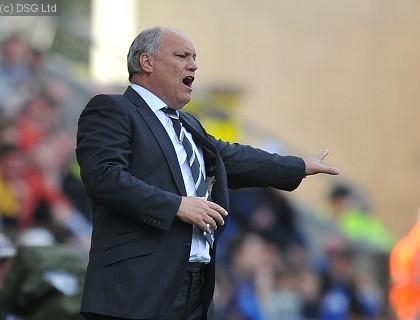 Lambert spot on to rescue Saints

The Boxing Day encounter at Craven Cottage was of grave importance to both sides given their position near the relegation zone.

Fulham came into the match with just one win in 10 matches but got off to the best possible start, taking the lead inside eight minutes.

Kelvin Davis could only fumble a Sascha Riether cross into the path of Dimitar Berbatov, who duly slotted home off balance at the far post.

The Bulgarian celebrated by revealing a shirt saying 'Keep Calm and Pass Me the Ball', although he failed to stay true to his word by somehow heading wide shortly afterwards.

The miss allowed Southampton back into the game and, after a number of missed opportunities, the strugglers grabbed a late leveller.

Saints academy graduate Chris Baird was adjudged to have handled a Gaston Ramirez corner, allowing Lambert to continue his 100 per cent success rate from the spot five minutes from time.

Steven Sidwell was one of three Fulham changes and should have given them a third-minute lead.

The ball was played in from the left flank and the central midfielder's low strike from the edge of the box went just wide.

It epitomised a bright start from the hosts, who needed just eight minutes to score the opener.

The former Manchester United striker was booked for revealing the personalised t-shirt when celebrating but should have soon had a second goal, nodding wide a weighted Alex Kacaniklic cross.

Southampton's first opportunity of note took 20 minutes to create, with a fierce Jack Cork strike from 25 yards well dealt with by Mark Schwarzer.

Berbatov was somewhat fortunate not to receive a second yellow card for a late lunge on Jason Puncheon as both sides struggled to keep possession in miserable conditions.

Davis dealt with a deflected John Arne Riise shot before Morgan Schneiderlin put wide and a fizzing Lambert cross was cleared from danger by Baird.

Ramirez - accused of stamping on Riise moments earlier - then saw a shot blocked by Berbatov as the visitors pressed for a leveller.

Martin Jol brought on Bryan Ruiz in place of the impressive Kacaniklic for the second half, with Puncheon fizzing an effort wide shortly after the restart.

Fulham were waiting patiently for their second goal, which was almost gifted to them by Luke Shaw.

The 17-year-old left-back's uncharacteristic slip allowed Ashkan Dejagah through on goal, but the winger lost his bearings and fired well wide.

Saints soon returned to the attack and Puncheon was called offside just as he struck at Schwarzer.

Dejagah saw a cross-shot flash wide moments before he was replaced by Kerim Frei, with Brede Hangeland having an effort blocked soon after.

Saints, though, were proving a thorn in Fulham's side, with Lambert close with a thumping volley 13 minutes from time.

Nigel Adkins brought on Jay Rodriguez in a late bid to find an equaliser, which came in the 85th minute.

Ramirez floated in a corner from the left and Baird was adjudged to have handled under pressure from Lambert, who stepped up to fire into the top left-hand corner.

Fulham claimed unsuccessfully for a penalty of their own shortly afterwards when Maya Yoshida barged Philippe Senderos before Ramirez's audacious 25-yard strike slipped out of Schwarzer's grasp and had to be stopped on the line.

Sidwell flashed a volley inches wide and Hangeland came close in stoppage time but Adkins' side held out for a point.