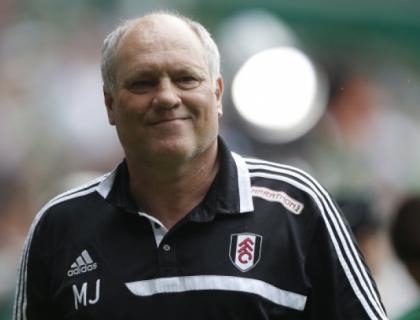 
Fulham had looked like ending a five-match winless streak at Craven Cottage following Steve Sidwell's first-half strike but now the run is six since the April 1 defeat of QPR.


Twice Dimitar Berbatov netted when offside before McAuley met Chris Brunt's corner with an emphatic header in the first of six minutes of stoppage time.


The Baggies had been toiling up until that point, but returned to the West Midlands content, while Martin Jol's hosts and their fans were left frustrated, a vocal minority even calling at the final whistle for the Dutchman to be relieved of his duties.


The Baggies' most recent Premier League goal had come against a Manchester United side managed by Sir Alex Ferguson.


But the prospects of ending the drought appeared promising - on paper at least - as Steve Clarke deployed a heavyweight strike in Victor Anichebe and Nicolas Anelka.


Anichebe and on-loan Marseille midfielder Morgan Amalfitano made their Baggies bows, but Stephane Sessegnon, another deadline day signing, missed out due to a delay in obtaining his work permit.


Amalfitano was part of a visiting midfield which stifled Fulham's efforts in the final third until Bryan Ruiz flashed an early effort wide after Pajtim Kasami's cross was only half cleared.


Philippe Senderos was marshalling Anichebe well and the Baggies made little forward progress other than a Brunt drive which was always curling away.


As the battle for midfield supremacy continued, Fulham won the game's first corner and took the lead.


Alex Kacaniklic's set-piece found Philippe Senderos, who held off McAuley to nod down for Sidwell to hit a shot on the turn between Youssouf Mulumbu, who was on the post, and goalkeeper Boaz Myhill.


Berbatov was clearly offside when he had a strike ruled out after 32 minutes before Brunt tried an audacious shot from 40 yards to revive Albion.


With his team-mates lined up to receive his free-kick, the midfielder shot wide of David Stockdale's goal.


Billy Jones was unable to meet an Amalfitano cross with any force at the back post as West Brom finished the half on the attack.


Berbatov was adjudged to be offside once more when tucking in a Kasami pass.


Had the marginal call gone in the Bulgarian's favour then Fulham would have been cruising but as it was the visitors were still in the contest.


The Baggies should have been level when Anichebe latched onto Brunt's pass and lost Hangeland, but the former Everton forward's shot lacked conviction as Stockdale blocked with his legs.


Berbatov had a legitimate opportunity when making an arching run to meet Ruiz's superb pass, but Myhill was alert to save.


The same combination went close when Ruiz drifted in field and lofted a pass over which Berbatov met acrobatically, directing the ball just wide.


The visitors needed a lift and it almost came when substitute James Morrison's pass was brought down and held up by Anichebe.


He then teed-up strike partner Anelka, whose shot was well saved by Stockdale.


It was the first time the Baggies strike pair had linked up to any real effect and showed the partnership's potential.


Moments later Anelka stole in behind the home defence to latch on to an Anichebe through ball, but lacking the pace of yesteryear, the Frenchman could not get a shot away, much to the relief of Senderos, who had lost his man.


Ruiz hit the bar six minutes from time and substitute Hugo Rodallega netted the rebound, only for the strike to be ruled out for offside.


Fulham, who saw Ruiz depart on a stretcher after an awkward fall, were made to pay.


The Baggies won a corner and Brunt's delivery was met by McAuley, whose header flew into the net.