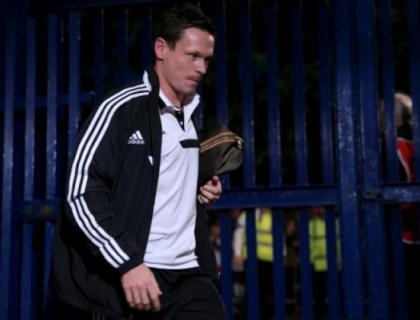 Shelvey wins it for Swans

Jonjo Shelvey came off the bench to fire Swansea to their first win in over a month as under-pressure Martin Jol saw Fulham slump to a fifth successive defeat in all competitions.


'Jol out' echoed around Craven Cottage at the final whistle after the west Londoners' promising start came to nothing thanks to a second-half collapse.


Fulham could have few arguments with the defeat as Michael Laudrup's side peppered the Whites' goal, before a fine Shelvey strike 10 minutes from time secured a 2-1 win.


It was the Welsh side's first victory since October 19 and one which looked unlikely as the managerial shake-up at Craven Cottage began brightly, with new head coach Rene Meulensteen's arrival looking to complement Jol.


Dimitar Berbatov and Darren Bent both looked lively for Fulham, with the latter coming closest with a half-volley that rattled the post.


Swansea began to impress as the first-half wore on and were denied a late first-half lead as a superb Maarten Stekelenburg save thwarted Nathan Dyer.


The Welsh side continued in the same vein when play resumed after the break and it was no surprise when they took the lead through an Aaron Hughes own goal.


Scott Parker, named Fulham captain for the first time, managed to draw parity somewhat fortuitously as a cross snuck in the top corner, but his side were unable to hold on for a point.


Shelvey showed impressive close control and even better finishing, rifling home from outside the box to earn Swansea victory, resulting in the fans rounding on Jol.


It was a far cry from the start of the match in which Fulham retained possession and attacked with renewed vigour.


Berbatov tried an audacious scissor-kick on the turn in the opening minutes, albeit from an offside position, and Pajtim Kasami, one of few bright sparks in their poor start, felt he should have had an early penalty.


Fulham continued to press for an early goal and centre-back Fernando Amorebieta impressively hooked an effort over his shoulder, which may have looked unnatural but was close to the returning Michel Vorm's goal.


Swansea soon began to grow into the encounter, although it took 25 minutes for their first chance of note as a Roland Lamah strike went just wide after deflecting off Hughes.


It was proving quite an open affair and one which Fulham should have gone up in when Parker floated a superb ball to the back post, where Bent nodded just wide.


The on-loan striker almost made immediate amends for that wasted chance when Chico Flores failed to deal with a ball forward, only his rasping half volley to come back off the post.


Berbatov was next to come close as Fulham enjoyed a period of pressure, heading a Bryan Ruiz corner just wide in the 34th minute.


Play soon swung the other way, with Lamah hitting wide and Wilfried Bony failing with a header before Alejandro Pozuelo robbed the ball off Derek Boateng and played through Dyer. The diminutive winger looked set to score a fierce low strike, only for Stekelenburg to make an wonderful save with his feet.


Swansea continued in the ascendancy after half-time and Bony showed excellent poise and control, before lashing across the face of goal.


The visitors pressed in number and took the lead when Pozuelo sent over a low cross from the right and, having just evaded Chico, Hughes was unable stop himself bundling into the Fulham goal.


It was nearly two soon after as Swansea broke forward, with Pozuelo again the creator but Dyer was denied by a late block.


That chance appeared to kick Fulham back into life, with Ashley Williams throwing his body in front of a goalbound Bent shot.


Parker set that chance up with a fine through ball and drew the Whites level from the resulting corner.


Taken short, the captain floated in a cross from just inside the box but the ball curled into the corner.


There was a large dollop of luck involved in Parker's 64th-minute equaliser, with Jol's side again counting their blessings soon after.


A fine Lamah back-heel put Bony through on goal, but Stekelenburg got down well to thwart the Ivorian frontman, who smashed into the side-netting shortly afterwards.


Shelvey saw a curled effort dealt with by Stekelenburg soon after, although the substitute soon found a way through.


With 10 minutes remaining, the former Liverpool man showed neat control, switched the ball onto his right foot and fired a sensational strike into the top corner.


It was a sucker punch for Fulham and one they were unable to respond to, despite ramping up the pressure in the closing stages.


It was no surprise, therefore, to hear 'Jol out' chanted by many, with only a late Steve Sidwell block preventing the scoreline getting even worse in stoppage time when Shelvey took the ball past Stekelenburg.