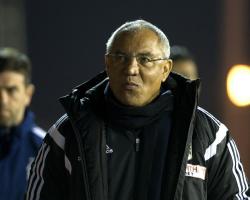 Fulham 2-1 Doncaster: Match Report - view commentary, squad, and statistics of the game as it happened.Ch-easy does it for CottagersKit Symons boosted his chances of becoming the big cheese at Craven Cottage as Fulham beat Doncaster 2-1 in the Capital One Cup

Symons has been placed in caretaker charge as the Whites attempt to get themselves out of the pickle Felix Magath left them in.And first-half crackers from Bryan Ruiz and Dan Burn were enough to secure only a second win of the season for the Sky Bet Championship's bottom club - the first also coming in this competition - and send them into round four.They still had to survive a second-half scare, though, as James Coppinger pulled one back before sub Theo Robinson missed a late penalty

Magath, who suggested using cheese to treat injuries during his disastrous seven-month spell in charge, had completely frozen Ruiz out of the first-team picture.But Symons, who hopes to replace the German permanently, immediately brought the striker back into the side and the move paid off in the 17th minute.Ross McCormack had already forced Rovers keeper Jed Steer to save with his legs after just 30 seconds as the hosts made a bright start.And Ruiz struck the first blow when he latched onto Hugo Rodallega's knock-down and drove ih a first-time shot from 15 yards

But centre-half Burn, standing in as captain for the rested Scott Parker, grabbed Fulham's second in the 31st minute when he took his 6ft 7in frame to the far post and nodded in McCormack's cross

But Fulham, having previously won just twice at home since New Year's Day, lost their way after the interval and Doncaster threatened when Nathan Tyson raced past Burn into the penalty area, only to drag his shot wide.The visitors deservedly pulled one back on the hour when skipper James Coppinger jinked his way into the box and thumped an angle drive past home keeper Marcus Bettinelli.And they were gifted the chance to equalise 12 minutes from time when Tim Hoogland handled Robinson's header in the area and referee Kevin Friend pointed to the spot.But the luck which has deserted Fulham all season was with them for a change as Bettinelli guessed correctly, diving to his left to keep out Robinson's low shot as the hosts held out for an all too rare win