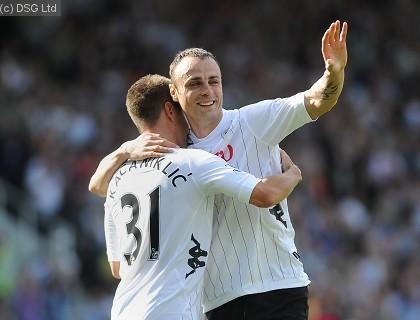 Nigel Adkins celebrated his first win as Reading manager as the relegated club halted their abysmal run with a fine, free-scoring display in a 4-2 victory at Fulham.

Disposed of by Southampton in January, Adkins was unable to stave off the drop after being brought in to replace Brian McDermott less than six weeks ago.

Their fate was sealed with last weekend's drab 0-0 draw against fellow basement boys QPR, but the recently-appointed boss will have been encouraged by what he saw here.

Hal Robson-Kanu's performance in west London was a particular highlight, starting off by slotting home a 12th-minute penalty after being fouled by John Arne Riise.

The Wales international deservedly doubled the Berkshire club's advantage in the second half, driving past Mark Schwarzer after a spell of sustained pressure.

Bryan Ruiz pulled one back for out-of-sorts Fulham with 20 minutes remaining, only for Reading to regain their two-goal cushion moments through substitute Adam Le Fondre.

It was not over there, though, with Ruiz heading home his second of the afternoon before substitute Hugo Rodallega rattled the crossbar.

However, Jem Karacan's strike seven minutes from time was enough to secure Reading's first victory since February 2 and maiden one under Adkins.

Many had expected the game to have an end-of-season feel about it but such a notion was quickly dismissed.

It took just 74 seconds for the first chance of note, with Ruiz destined to slot home until he met the fine reactions of Alex McCarthy.

A hint of sloppiness was detected, though, when in the 12th minute Riise, perhaps already thinking of his summer holidays, went to clear the ball but only managed to kick Robson-Kanu.

Neil Swarbrick pointed to the spot after adjudging the challenge to be in the box, with the Wales international dusting himself off to send Schwarzer the wrong way.

Reading's embattled supporters were quick to goad the hosts, who were struggling for ideas and possession.

In situations like this Fulham rely on talisman Dimitar Berbatov, but he too was struggling to make an impact.

The Bulgarian scuffed a close-range shot on the turn in the 20th minute and could only direct header into McCarthy's hands moments later.

Garath McCleary and Danny Guthrie both flashed audacious long-range drives just wide when Reading returned to the attack, before Martin Jol replaced the ineffective Giorgos Karagounis with Rodallega after 28 minutes.

Only fine goalkeeping from McCarthy prevented the Colombian making an immediate impact, before Reading captain Jobi McAnuff stung the palms of Schwarzer when Reading returned to the attack.

A side-footed volley by Riise was the closest the home side went before the half-time break and Rodallega called McCarthy into action three minutes after the restart with a fine half volley on the turn.

However, it was the Royals who started the brighter and Karacan saw a prod goalwards saved brilliantly by Schwarzer.

The vast majority of the 24,087 inside Craven Cottage were becoming increasingly frustrated as Reading dominated - a feeling which was almost compounded by Pavel Pogrebnyak.

The Russian turned down a permanent move to Fulham in the summer and looked like he would bundle home off balance, only to be thwarted by a last-ditch clearance by Philippe Senderos.

Fulham pushed forward after the lucky break and felt they should have had a penalty for a Stephen Kelly challenge on Berbatov.

Referee Swarbrick waved away the appeals and Reading soon punished lax defending by the hosts.

McCleary had acres of space on the left and his blocked shot fell kindly for Robson-Kanu, who cut in curled past Schwarzer.

The visiting support chanted '2-0 to the Championship' but were soon hushed, with Ruiz played a one-two with Rodallega before directing through McCarthy's legs.

The 70th-minute goal kicked off a dramatic end to the game, with Reading regaining their two-goal advantage five minutes later.

Le Fondre, only just on as a substitute, latched onto a lofted Karacan ball and continued to round Schwarzer to slot home.

Fulham were not finished, though.

Ruiz netted his second of the afternoon by heading home just two minutes later, before Rodallega clattered the crossbar after connecting with a Berbatov cross.

Reading were on the backfoot but their nerves were settled when Karacan met a loose ball on the edge of the box to fire home the visitors' fourth of the afternoon.

Rodallega went close on several occasions late on, but Reading held on to condemn the hosts to a fourth successive defeat.