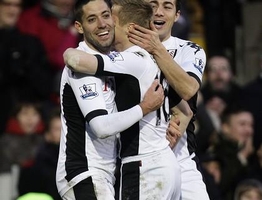 The United States international was named his country's player of the year on Friday and showed why with a superb second-half performance at Craven Cottage.

Having managed just one shot in an appalling first-half performance, Fulham deservedly fell behind to a superb Danny Guthrie long-range drive as half-time approached. However, Martin Jol's half-time pep talk and tactical tweak proved inspired as the west Londoners scored four goals in a 16-minute period. Danny Murphy and Bobby Zamora netted penalties either side of a Dempsey brace as Fulham ran the Magpies ragged. Hatem Ben Arfa reduced the deficit with the clock winding down, although Dempsey had the final word by firing home his third.

Coming into the match, Jol spoke of making amends for last weekend's 3-1 defeat at 10-man Blackburn but his side struggled to stamp their authority during the opening exchanges.

Zamora was often isolated in attack and Alan Pardew's side dominated possession as Yohan Cabaye got an audacious effort away inside the opening minute.

David Stockdale easily gathered the effort and was not called into action again until the 13th minute when Shola Ameobi - making his 250th league appearance for the club - headed a Cabaye cross goalwards.

Newcastle were impressing by the Thames and a mazy run by Ben Arfa ended in a long-range drive the Stockdale did well to parry.

The former Newcastle midfielder cut in from the left flank and got away a curling shot that Tim Krul did well to clutch to his chest.

That aside, though, the Cottagers were looking sloppy, which was epitomised by Philippe Senderos almost heading a Leon Best chip into his own net after ignoring calls from goalkeeper Stockdale.

The west Londoners were backing off the visitors and almost paid the cost when skipper Fabricio Coloccini directed a right-wing cross goalwards, only to be denied by Stockdale.

Fulham's difficult opening period got worse when Steve Sidwell - one of Fulham's better players - limped off in the 37th minute to be replaced by Andrew Johnson, forcing Jol to alter his tactics.

The substitute partnered Zamora in attack as the home side moved to a 4-4-2 formation, although it could not stop Newcastle dominating.

After Stockdale tipped wide a rasping Ameobi effort, the England squad member could do nothing to stop a superb 25-yard strike by Guthrie as half-time approached.

Jol made his second alteration of the afternoon at half-time, replacing Bryan Ruiz with Chris Baird.

The change saw Fulham become a more coherent unit and one which earned a penalty six minutes into the second period when Duff was brought down inside the box.

With Baird shutting down the dangerous-looking Cabaye and the new-look attack working well, the Cottagers were now in the ascendancy.

Only last-ditch defending stopped the home side taking the lead from an outswinging Murphy corner in the 56th minute.

First Krul reacted marvellously to stop Zamora netting from close range on the turn, before Baird saw his follow-up deflected over.

Fulham continued to press and, after neat interplay between Johnson and Zamora, Krul parried the latter's shot across goal and Dempsey bundled home at the far post.

Baird fired a 35-yard effort over as the Cottagers pressed for a third, which came in the 65th minute.

Again neat interplay between Fulham's strikers started the goal as Johnson laid off to Zamora and he played through Dempsey, who showed composure to fire across Krul.

Fulham netted a fourth three minutes later when Johnson shrugged off a rough challenge by Mike Williamson before being hauled down by Krul, who received a booking and was then beaten from the spot by Zamora.

Ameobi thought he had reduced the deficit almost immediately with a low shot, although he was rightly adjudged offside.

Fulham sat back as the game wore on, allowing Jonas Gutierrez to fire a long-range effort straight at Stockdale.

Newcastle did, though, pull a goal back five minutes from time as Ben Arfa jinked past John Arne Riise to fire home, although Dempsey soon ended any hopes with his hat-trick goal.

The Texan burst through the middle to latch onto a Zamora chipped pass and fire past Krul.