Football pitches across the world have been home to some incredibly memorable moments. Stunning goals, fantastic assists and ludicrous pieces of skill always live long in the memory, but that's just the half of it.

Every now and then, fans get to see something utterly crazy which they will probably never see again, and it doesn't always link to the actual football being played.

Here are eight of the craziest things to ever happen on a football pitch.

Surprise Visitor Drops in to Watch In history, plenty of rogue items have found their way on to a pitch, but how many times has a parachutist interrupted proceedings?

In 2013, Salisbury City's meeting with Chester was temporarily halted after a charity parachutist ended up falling on to the field in the middle of a game.

He gathered up his parachute and sheepishly made his way off the pitch, in what was one of the most unique stoppages in history. We all know how frustrating it can be to see your side have a goal ruled out for offside. However, PAOK Salonika president There is no bigger stage in football than the World Cup. People across the globe understand that, and it looks like some animals do as well.

​During the quarter-final of the 2014 World Cup between Colombia and Brazil, midfielder ​James Rodríguez was targeted by what looked like a giant grasshopper, which landed on his arm to celebrate as he scored a penalty. When a goalkeeper makes a mistake and gifts you a clear shot at an open goal, you'd feel pretty good about your chances of scoring. Unfortunately for Argentinian side We've already had a parachutist on the pitch, but how about a cabbage?

The start of the 2018/19 season was a tough one for ​Aston Villa, and it all culminated in manager Steve Bruce being targeted by a disgruntled fan, who threw a cabbage in the direction of the boss.

The image of the cabbage sat next to the dugout has gone down in football history, but for all the wrong reasons. We all know the rule that two yellow cards turns into a red. Croatia defender 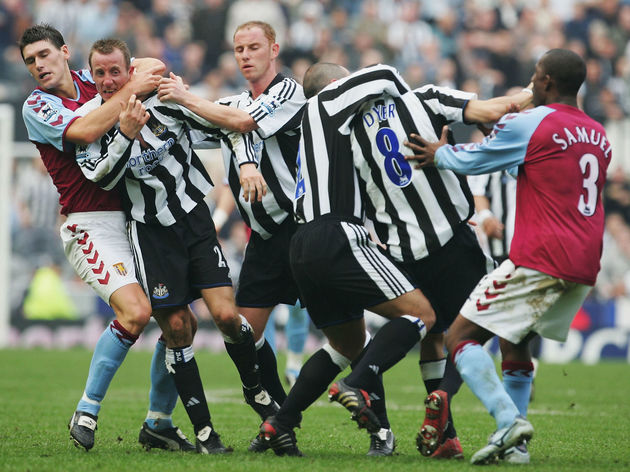 Football is a competitive sport. Sometimes, tensions get a bit too high and players butt heads, but rarely does that happen to two men on the same team.

The most infamous case of this came back in 2005 during ​Newcastle United's meeting with Aston Villa. Kieron Dyer and Lee Bowyer were involved in a bizarre physical fight which saw both players sent off for violent conduct.

To make matters worse, the team lost the game 3-0, in what was a utterly miserable day for everyone involved.​ This entry takes us back to Norway in 1957, and specifically a meeting between

This article is brought to you by Birds of Prey, in cinemas soon. Check out the trailer below: