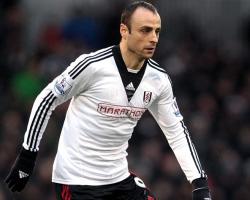 The 33-year-old arrived in west London from Manchester United in August 2012 and quickly made an impact, netting 15 goals and being named player of the season.

However, Berbatov has failed to hit the same heights this term and his agent, Emil Dantchev, last month claimed he wanted to leave Craven Cottage.

The Bulgarian forward has now got his wish, Monaco announcing his signing on loan until the end of the season.

"I look forward to starting training with my new team-mates and open a new chapter in my career."

Berbatov will wear the number 15 at Stade Louis II, where he will stay until the end of the season, when his contract with the Cottagers expires.

The forward had been linked with a return to former club Tottenham, but will instead join up with a Monaco side second in Ligue 1 and without Colombia star Radamel Falcao for the rest of the campaign due to injury.

Speaking about the addition of Berbatov, Monaco vice-president Vadim Vasilyev said: "Dimitar will bring us all his experience and talent.

"His coming is of course connected to Radamel Falcao's injury

He played in big clubs such as Manchester United and he's a big striker.

"We still have two competitions to play and he will be an asset with Emmanuel Riviere, Valere Germain and Anthony Martial

He has a different profile than our other forwards."