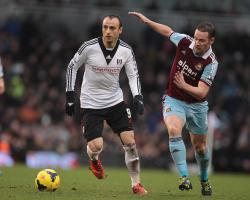 A furious Allardyce slammed the experienced midfielder for losing his cool in kicking out at Fulham's Fernando Amorebieta.

Nolan was dismissed for kicking the defender's leg off the ball in West Ham's 2-1 Barclays Premier League defeat at Craven Cottage.

The 31-year-old was also sent off for a lunge at Jordan Henderson in West Ham's 4-1 defeat at Liverpool on December 7.

"I just don't quite understand where he's lost his cool and why it's happened," said Allardyce, who saw his side squander an early lead.

"I know the centre-half fouled him, and I also know that (referee) Mark Clattenburg didn't give a free kick and he should have done.

"But it's still not an excuse for what Kevin did, and he ends up getting himself sent off."

The Hammers led through Mohamed Diame's seventh-minute strike but Steve Sidwell levelled before Nolan's dismissal, with Dimitar Berbatov then scoring the second-half winner.

But Allardyce felt his side should have capitalised on their early advantage, and Nolan was again to blame.

"He was involved in a real key moment that was looking good for us in terms of the header on the far post that would have sent us two-nil up," he added.

"After a great start we looked like we could get another one, and go on and test this back four of Fulham's.

"But when you have a man sent off it gets very difficult indeed.

"So he's responsible for us probably losing the game more than anything else, there's no doubt about that.

"I don't understand it because this indiscretion comes straight after what happened at Liverpool.

"So I'm going to have to find out what's wrong with him, there's something wrong with his mentality at the minute.

"Because at his age and his experience, he's a player I've known for many years, I haven't seen this type of reaction or this type of situation that he's put himself into.

"The responsibility of the player is to play the game to the best he possibly can, and to go out and be disciplined, apply his talents in the correct manner within the laws of the game - not to lose your head, and not to do anything silly.

"And you can expect it from somebody starting out occasionally, a youngster finding his way in the game, finding out about the nitty-gritty of the Premier League.

"The pulls, the pinches, whatever they might be: but not Kevin."

Admitting he will review whether Nolan will keep the captaincy, Allardyce said he cannot afford to miss another frontline player as West Ham's relegation battle deepens.

Allardyce made Nolan his captain at Bolton, before recruiting him to leadership roles at both Newcastle and now West Ham.

Allardyce said he will worry more about midfielder Mark Noble's calf problem that could be a muscle tear, than Nolan's predicament.

"I don't know yet," said Allardyce on Nolan's captaincy situation. "I'm disappointed enough with what he's done and time will tell.

"I'll deal with the situation internally as we always do, and my focus will now be the players who are available, not Kevin Nolan who is not available.

"The rest of the players did a fantastic job, trying to stay the game then to try to come back from 2-1 down.

"It was nice to see Stuart Downing back because he gave us the impetus to start attacking towards the end of the game when we were down to 10 men.

"My concerns are well-documented, and on top of that Mark Noble adds to our injuries, and he's someone we can ill afford to be without.

"We're in a massive hole at the minute, so we've got to start digging ourselves out, and we need to start getting players back fit and playing again.

"He's got a calf injury: he couldn't play on with it.

"We'll send him for a scan and see what grade the injury is, whether it's a tear or just a tightening.

"We need to get others back as soon as we can.

"We got one back but two are now out, and one irresponsibly."

Fulham head coach Rene Meulensteen was proud of his players for attacking with purpose and incision after Nolan's dismissal.

A week on from capitulating 6-0 at Hull, Meulensteen said this victory proves that hammering was not a trend to be overly worried about.

"The sending off helped us but we still had to be calm and attack with quality," said Meulensteen.

"You see teams struggle against 10 men all the time, but I told the players to attack, but keep that quality.

"We definitely deserved the result because we had plenty of chances.

"David Stockdale made a couple of excellent saves and it was just reward for him keeping his focus after what happened last weekend, which wasn't his fault."