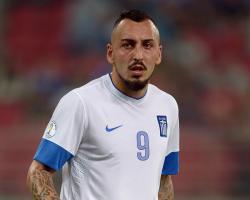 Berbatov has been allowed to travel to Monaco for a medical ahead of a potential loan move to the Ligue 1 side.

The Cottagers have replaced him with the highly-rated Mitroglou, who has moved to Fulham from Olympiacos for an undisclosed fee

West Ham were interested in signing Mitroglou but the 25-year-old has opted to move to Craven Cottage instead.

Mitroglou has signed a four-year contract with the west London club.

The striker began his career in Germany, but moved to Olympiacos in 2007.

He has enjoyed a superb season so far, scoring 14 league goals in the Greek Super League.

Fulham manager Rene Meulensteen will hope that Mitroglou can fill the void left by Berbatov, who has struggled for form recently.

Berbatov joined Fulham in August 2012 and enjoyed a successful first season with the club, scoring 15 goals.

This season has been a different story for the Bulgarian, however.

He has found the net just four times in the Barclays Premier League and his agent indicated that his client was unhappy at Craven Cottage shortly after the sacking of Martin Jol.

A move back to Spurs, where he is adored by the club's fans, would have been an ideal scenario for Berbatov.

But a transfer to Monaco would still be a good move for the former Manchester United man.

Berbatov was due to undergo a medical at Monaco, who sit second in Ligue 1, on Friday afternoon.

If he passes that, he will sign on loan until the end of the season, when his contract with the Cottagers expires.

Fulham have been one of the busiest clubs in the market on deadline day.

The west London club snapped up Lewis Holtby on loan until the end of the season and have also lodged a bid for Swansea defender Neil Taylor.