first arrived in Sweden in 2014, signing for Stockholm-based club AIK fresh from a fairly uninspiring spell at Blackburn Rovers.

The offence involved a match between AIK and IFK Göteborg in the Allsvenskan. It wasn't the greatest attempt in history as the match was called off shortly before kick off when the authorities were made aware of the attempt by the player who was approached. The ex-Premier League midfielder was found guilty of offering money to teammate Kyriakos Stamatopoulos, who was AIK's back-up goalkeeper at the time, to allow Göteborg to win.

In ​a statement the Swedish FA said: "The Disciplinary Board has decided to suspend two people because they have deliberately tried to persuade a football player to underperform in one of the team’s matches.

"Through their actions, these people have violated the anti-match fixing regulations, and they are therefore suspended for five years.

"The ban includes training, competing or performing any assignments in any sports."

What it means is that Etuhu, who played for his country at the 2010 World Cup, is banned from playing for or coaching any Swedish club until April 2025. 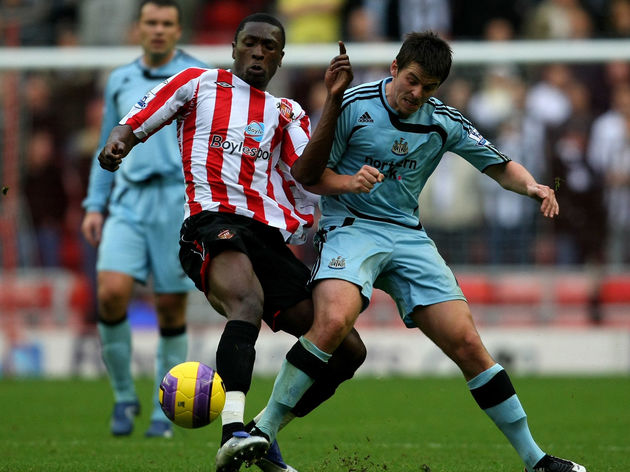 Etuhu enjoyed a 14-year stint in England. Starting at ​Manchester City, he was one of David Moyes' final signings as Preston boss, where he impressed in the ​Championship for almost four seasons and earned a move to Norwich City.

He was signed by Sunderland in 2007 upon the Black Cats' return to the ​Premier League under Roy Keane. His best spell, however, came at ​Fulham as he was in the heart of Roy Hodgson’s midfield that famously went all the way to the Europa League final in 2009/10.

And of course he scored this cracker.

#TBT to April 2009 when Dickson Etuhu scored this belter against Manchester City. #FFChttps://t.co/ljuS4OhUNi

Injuries eventually led to Etuhu being released by AIK and dropping down five divisions to play for IFK Rössjöholm, before he hung up his boots in 2017.

While Etuhu may have officially hung up his boots years ago, the announcement will certainly tarnish any hope he had of a future in the sport.