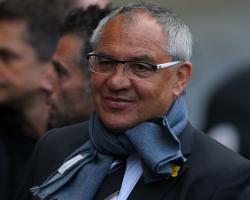 Martinez comments on Magath missionEverton manager Roberto Martinez believes Fulham counterpart Felix Magath's task of avoiding relegation was actually made easier by the lack of time he was given to save the club.The German, the Cottagers' third boss this season, took over in mid-February after a chaotic period which saw Rene Meulensteen's spell in charge ended after just two months.In his five matches he has picked up just four points and they remain bottom of the table four points from safety.However, Martinez believes the small amount of time Magath had to stave off the drop could work in his favour."Felix Magath took a completely different challenge," said the Spaniard."It wasn't a change of manager just to see a different direction at the club, it was clear he was taking a football challenge of trying to get a big points average in a short period of time to try to stay in the Premier League."When you have 25 games to go in a season it becomes very difficult because there is so much talk about what could happen and what direction you can go."Everyone has an opinion and it can affect the team but when it is a short period of time it is very straightforward."It is a narrow approach and all you need to do is try to get as many points as you can and try to carry momentum from game to game."You don't even think about what may happen in the summer, what will happen to players' contracts."It is 10 or 11 finals that you try to prepare for in the best possible way and try to make difficult for the opposition."It is clear Felix Magath has the experience to provide a very difficult game in every game he puts his Fulham side out in."He is clear in the way he gets his teams set up and I think since he has been at Fulham they have been unfortunate in a couple of games and in the same manner he has been finding out a lot about his new players."I do feel this Fulham side is a completely different one to the one that came to Goodison Park."Everton captain Phil Jagielka will travel with the squad

The centre-back has missed five matches with a hamstring injury and although he was fit earlier in the week, Martinez chose to leave him out for the 3-0 victory at Newcastle.Magath insists completing the seemingly-impossible task of keeping Fulham in the Premier League would be one of his proudest achievements

Everton visit Craven Cottage on Sunday in a critical fixture that bottom place Fulham, who sit four points adrift of safety, must win if they are to escape relegation

Magath has won Bundesliga titles with Bayern Munich and Wolfsburg, but views securing a 14th season of top flight football for the Cottagers as the rival to those achievements

"Yes it would be one of my biggest achievements in football," said the German, who replaced the sacked Meulensteen on February 14

"It is a very difficult situation at the bottom of the league and there have not been not many things to do because the time to buy new players was over, so I had to work with the players that are here

"That is very, very difficult if you have players who have not had success for a long time

"I knew this was a difficult job and I don't care

I'm happy to do such a job

"I've always done jobs like this and like to work for things that seem impossible."Fulham striker Kostas Mitroglou will miss out because of a knee problem

Midfielder Scott Parker is also out with a knee injury, but winger Ashkan Dejagah returns after recovering from a muscle issue