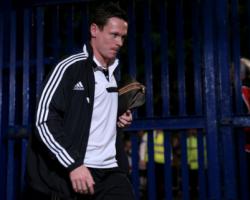 
Meulensteen has staff to avoid drop

Rene Meulensteen has confirmed he will not make any further additions to his Fulham backroom staff.


He said: "I think I've done really well already, so no, I'm very happy with the situation we have at the moment.


"I felt he (Curbishley) strengthens my team, It's so important to have the right people around you, and that's what we've been doing.


"We've got a nice, dynamic staff around me, with some young guys that I know from a long time ago that understand my principles and values, and I've got Alan Curbishley and Ray Wilkins in as two people with vast experience in management.


"All that can only contribute to making sure we've got a better chance of staying in the Premier League.


"Any successful manager in any walk of life gets the right people around them.


Confident Khan will free up funds for new recruits in the transfer window, Meulensteen said he will draw on Curbishley and Wilkins to convince Fulham's new owner to dig deep.


He said: "I've been assured I'm going to get the support I need.


"Whatever funds I don't know, we haven't really spoken about that.


"The most important thing is that we've had good, open and honest discussions with the owner.


"He knows how important it is for us to stay in the Premier League, and with the additions of Alan and Ray it will make our case even stronger, that if we do think we need to improve and we need support, that we can put an even stronger case forward.


"And I'm sure he will support that.


"We just have to look at what's possible and what's available."


West Ham's team spirit and confidence has not been dented despite the threat of relegation, according to defender George McCartney.


A 3-3 draw at home to West Brom on Saturday left West Ham languishing in 19th place in the table with 15 points from their opening 19 league fixtures.


Hammers boss Sam Allardyce is the only manager of a side currently in the bottom six who was in charge at the start of the campaign and Northern Ireland international McCartney has revealed the squad remain confident they can get out of trouble.


"You look over the last few weeks at the teams that have sacked their managers," he said. "The players haven't been happy with whatever way they were playing but our dressing room is great, confidence is high, the spirit is high.


"We're all in it together and we're still doing all the right things on the training ground.


"It is after Christmas now and when you find yourselves in the bottom three, everyone maybe gets a little bit edgy and games you feel you should be winning you're just not getting across the line.


"It eventually catches up on you. The dressing room's great and we're just trying to move up the table again and get ourselves out of this situation."


Allardyce takes his side to face fellow strugglers Fulham with as many as seven first-team players ruled out through injury.


With club-record signing Andy Carroll sidelined since the start of the season many would be forgiven for thinking it is in attack where the Hammers are currently light.


But it is at centre-back, where Allardyce has no fit recognised players, where West Ham have been exposed due to injuries to Winston Reid, James Collins and James Tomkins.


McCartney filled in the role against West Brom and would be happy to continue there for as long as he is required.


"Obviously it's not great when you have two or three regular centre-halves out injured, but I think nowadays players have got to fill in when needed.


"We finished the game [against West Brom] with four full-backs in defence. It's required these days. You've got to be able play in more than one position and fill in when players are injured."