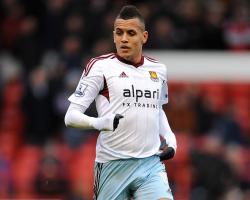 Morrison, 20, has been one bright spark in West Ham's otherwise poor first half to the season but has just 18 months remaining on his contract at Upton Park.

The England Under-21 international, who worked with Meulensteen when the Dutchman was assistant manager at Manchester United, has scored five goals in all competitions so far this term for Sam Allardyce's side.

West Ham have flagged up Meulensteen's comments following Fulham's 3-0 FA Cup third-round replay win over Norwich on Tuesday evening after he suggested Morrison was keen on a move across London and that an opening bid had been rejected by the Hammers.

"Yes, we did make a bid," Meulensteen said.

"Yes I think he does want to come. He would add pace, power, unpredictability and a real attacking threat.

"I don't know what the situation is now, because that's left with [club director] Alistair Macintosh.

''We got knocked back, it got rejected, and so we need to review it and move on. I've explained how I think about the situation [to the Fulham board], so we'll have to wait and see what happens.

''I've known him for a long, long time, but the thing is this: we have to wait and see how the club takes it forward as to whether there's another bid.

''He would bring youthfulness, energy, unpredictability, attacking strength, loads of things. I've made my desires clear so I'll leave it up to the relevant people to take forward. I don't know the ins and outs."

With Morrison under contract at West Ham, the club's complaint is likely to surround Premier League ruling T.8 - which reads:

Both rules T.3 and T.6 relate to a club making an approach for a player under contract or the player, or his representative, approaching clubs in the hope of instigating a possible transfer.

If the Premier League deems Fulham are in breach of the rules, the club could face a reprimand or fine - it is also possible the case could be referred to the Football Association.